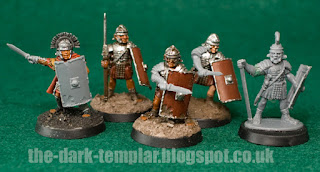 They've been staring at me from the stowed painting tray like a boy band on a balcony, so I thought I should make like the paparazzi and get some mug shots. 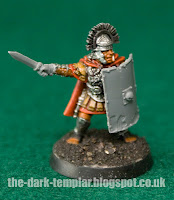 As mentioned in the last post my Centurion, Typhus, got his weapons. Now the proud owner of a gladius and (rather battered) scutum he can at least defend himself now and hopefully inflict some more damage on the enemy.

The pilum wielding legionary, Marcus, hasn't warranted any alterations. He's done an ok job so far in battle, without being terribly outstanding.

Quintus – clearly the bad boy of the group – used to have a pilum too. However, it was posed rather poorly, not intimidating at all and that won't do. He also had a corker of a weekend, racking up almost half a dozen kills. I removed his pilum arm and replaced it with an armoured gladius arm instead. He now looks like he's banging his shield to taunt the enemy. Excellent.

I hadn't noticed until now that he has a patch over one eye. Quite ironic considering he didn't survive either battle we played on Sunday. 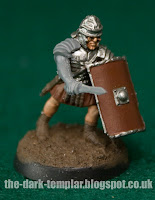 Crixus has been a stalwart of the ranks for a couple of months now, prompting a rather hasty paint job a few weeks ago. He got an upgrade too, going from a rather static pose of his gladius arm to something altogether more 'stabby'. 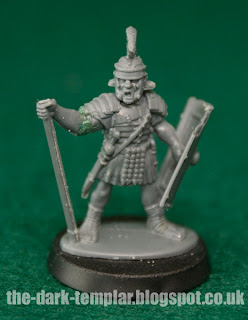 Finally we have the, as yet un-named, new boy – the Optio. I was considering calling him Cato, but there's a bit of an "…us" trend developing with my legionaries' names so I'm thinking he will have to comply… Cactus? (depends how good he is at fighting I guess). 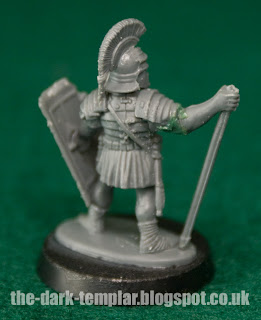 He is made from the basic plastic legionary kit, with a couple of bits from my Greek Hoplite sprues. I chopped up a couple of Roman arms to get the angle that I wanted. It's stuck crudely in place with some greenstuff filling the gap and I'll go back and finish this off before painting. His staff is made from a Hoplite spear and is needing a top part before it is complete.

His plume also came from the Hoplites and I will sculpt a couple of simple feathers out of greenstuff to stick on either side of his helm to complete the look. Being a basic legionary figure his gladius is on the correct side for an Optio so it all worked out rather nicely. 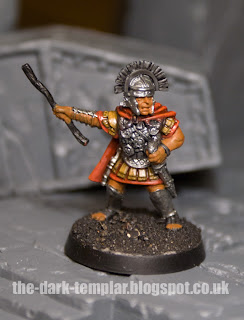 So the focus is back on the 'secret project' and after visiting Bull at the weekend I'm in need of building more models to expand my Roman Legionary collection.

In addition to converting my Centurion (above) to have a Gladius and Scutum (it's difficult to smite the enemy with nothing but a stick and defend yourself with nothing but harsh words) and finish painting him, I'm attempting to create an Optio. 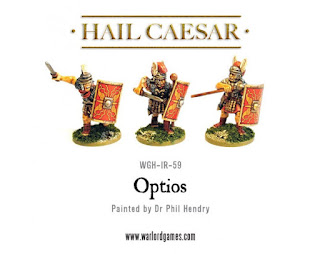 Looking around the internet, Warlord Games do a set of three metal Optios for a fiver (above). Nice models but given that I have a box full of plastics I'd like to avoid the expense of buying more. It's very do-able, in fact as I write this he's mostly built already. 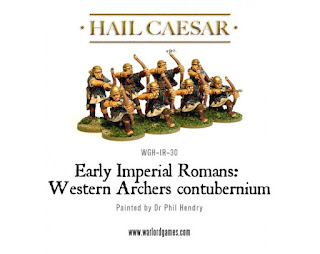 I also need to create a couple of Auxiliary Archers. That poses much more of a challenge given that (1) I don't own any Auxiliary models yet, and (2) none of the plastic Auxiliary kits available have any bows that I can see. Again, I want to keep the expense to a minimum – this will take some creative thinking! 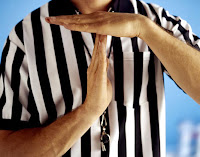 Some of you may have noticed that blog posts have been scarce the last few weeks, blog posts of my model progress even rarer. The bottom line is we're going through a rough time at the moment here – not financially despite the global downturn, more emotionally. We've had some health issues and sad times, to be honest the motivation to paint has been remarkably absent even if my love of the hobby has not diminished. So I've had a bit of a timeout recently. Can't say when I'll be back to full flow on the blog front but should have some worthwhile posts shortly.


I have done some model building this last weekend, the Warmachine Khador starter box (don't ask how this ended up in my hands, lol, you already know the answer!). It is only 3 models and I managed to get them all stuck and pinned in an afternoon. Just have to spend a significant amount of time filing off the mould lines (crappy Privateer plastics) and then I can spray them. I hope to use the airbrush to get them rattled off quite quickly before they find their way on Ebay.

Talking of Ebay, I shall be adding a host of stuff this week for the UK viewers. I've decided that rather go down the gamble that is worldwide auctions starting at 99p, I shall put my stuff on with a Buy It Now price and free postage. This should mean I can clear the decks quicker – the spare room is creaking at the moment.

Other hobby stuff is bubbling away. My secret project is still going strong and hope to have an announcement about that in the next month or two. I'm also preparing to create some hobby boards, which is very exciting – a bit like the Malifaux boards I did a couple of years ago but smaller and much shinier.


Looking around the net it seems a great time to be a part of our hobby. Lots of exciting Kickstarters, some fantastic models about, and GW getting slapped down a peg or two in court… good times.

I was interested to see the new Eldar codex release and then concluded that 40k is becoming something of a joke now – having to spend £70 on an Eldar titan-esque model just to compete, no fun. The codex escalation also means that my Chaos are becoming less and less competitive (even if I purchase more Heldrakes at £40 each). With the Space Marine codex due in September I'm expecting things to go super-silly, given that the SM are the most popular line of models.

This was the first time I'd been to the Broadside show, despite it being less than an hour away in Sittingbourne. The leisure centre was pretty easy to find, given that I've never been to the area before, and my trusty iPad ensured I got there without incident.

I was met by some very friendly folk on the front desk requesting an entrance fee of only £3 – bargain, even on top of the pay and display parking. There were two main halls that had both traders and demo/display games going on. I spent the next hour wandering round, but with nothing on my shopping list I saw little that made me want to part with cash… and even less that I could justify (having just bought a wacom tablet for my iMac).

Despite the low key atmosphere it was great to browse and see what was going on. I did see demo games of Saga and X-Wing and a single trader with some Warmachine boxes but the majority of the show was historical gaming in some form or other. No ancient history games that I could see so I kept wandering.

I had a good chat to Ian from Fenris Games. You may remember he helped out with donations for the Tale of 3 Painters charity project I ran last year, and it was good to finally thank him face to face. He talked at length about the current Kickstarter project that he's involved with – Cthulhu Wars – and his plans for the coming year. All very exciting and I must go and see him at his base of operations in Chatham Dockyard soon.

The visit was rounded off with a long chat with Postie's Rejects, specifically Fran and Ray. Fran had a very kind donation of coins for my 5p collection. He busking efforts have contributed greatly to the project. It was great catching up with them and made the trip worthwhile.

Fran told me that I need to paint more so, now that I have had two weeks off to lay some patio in the garden, I should be back to the painting later this week. 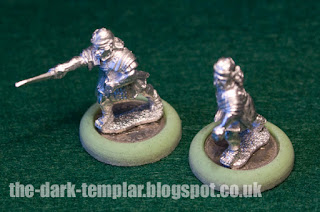 Seems inflation is a bigger problem than I'd realised these days.

It seems a penny is no longer enough to secure weight in the base of my miniatures – I'm having to resort to 5 pence pieces!!

This hobby is getting expensive… 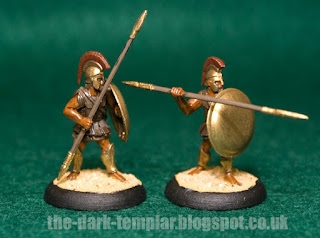 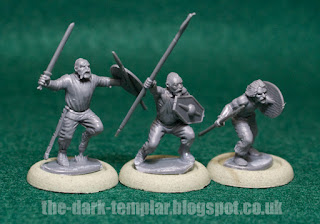 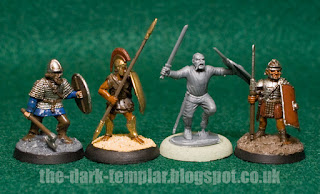