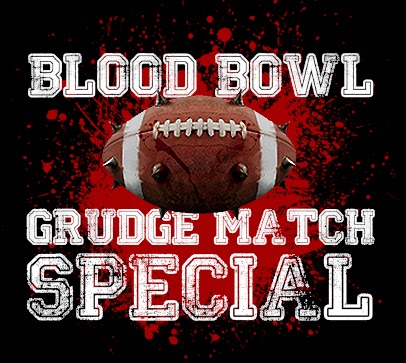 Keep that in mind as you read this Grudge Match special report.

Game day saw the first outing for my new plastic Dark Elves models. The pre-game team photo above is quite poignant given the drama that was about to unfold. The linemen at the back are the regular GW metals. The front row shows (left to right) Blitzers Torel Dragonclaw, Adin Heartrender (note the heart motif on his chest), Nenil Spinescourge and Kirzir Deathreaver, with our Runner Rakiri Razorwing far right. 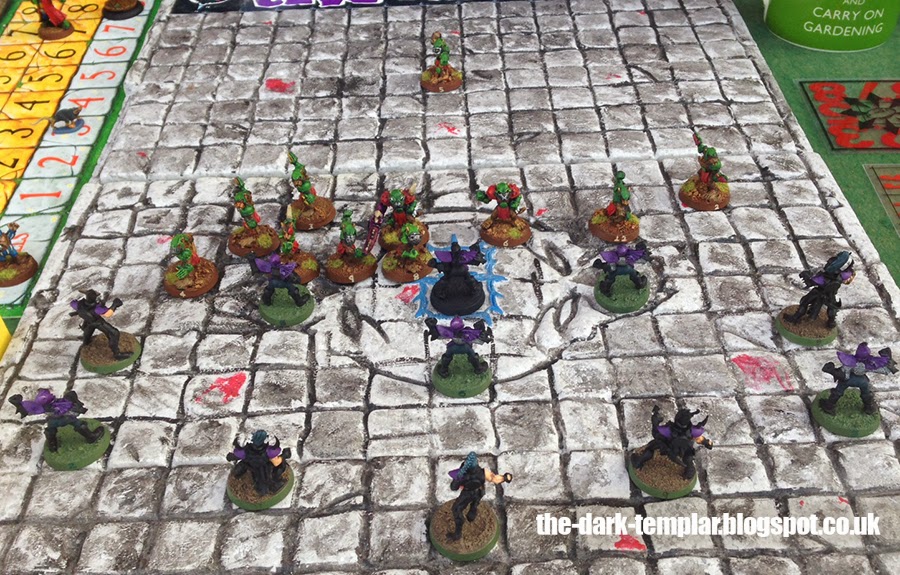 We won the coin toss and elected to kick to the Rats. My pre-game research had led me to some new thinking with deployment against 'dodgy' teams. For the opening few turns things went well, we were containing the Rats and frustrating Bull – he just couldn't get through. Then things went really bad for him. 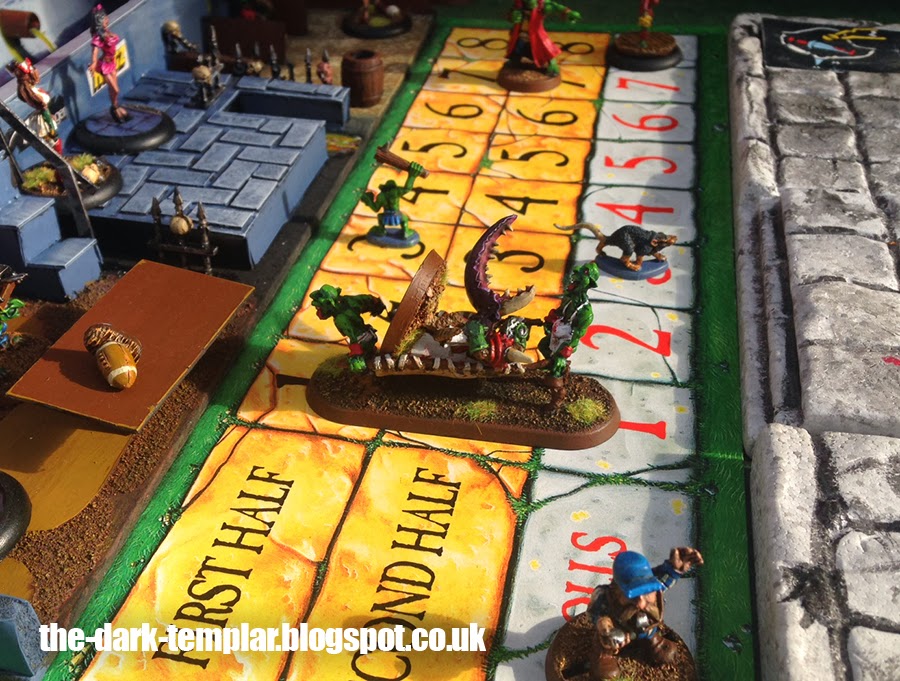 His hero Blitzer with the claw got pushed off the pitch, knocked out before he could terrorise the Dark Elves any further. Bull's new Goblin stretcher bearers came in very handy. It got worse, the Rats were misfiring with their dodges, Bull failing six Dodge rolls in succession, effectively losing two complete turns due to early turnovers. 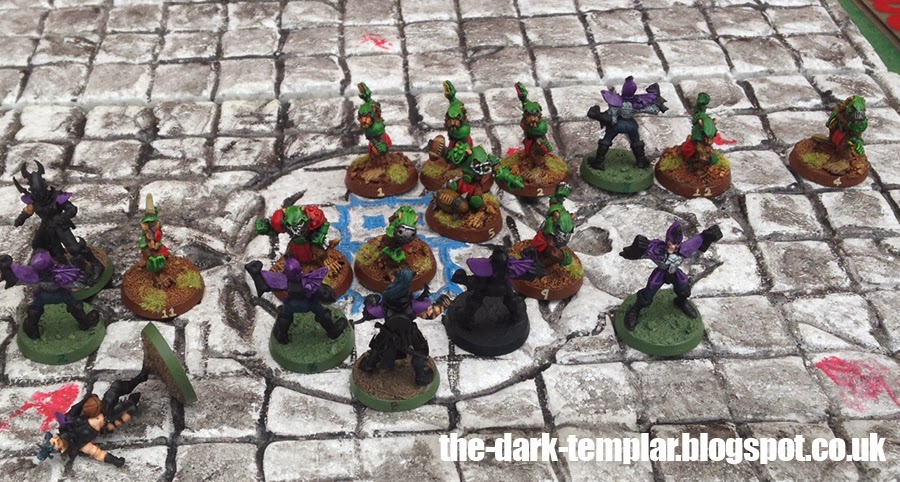 The Skaven Thrower still had the ball though, waiting for an opening or a free Gutter Runner. He just couldn't get past the half way line. 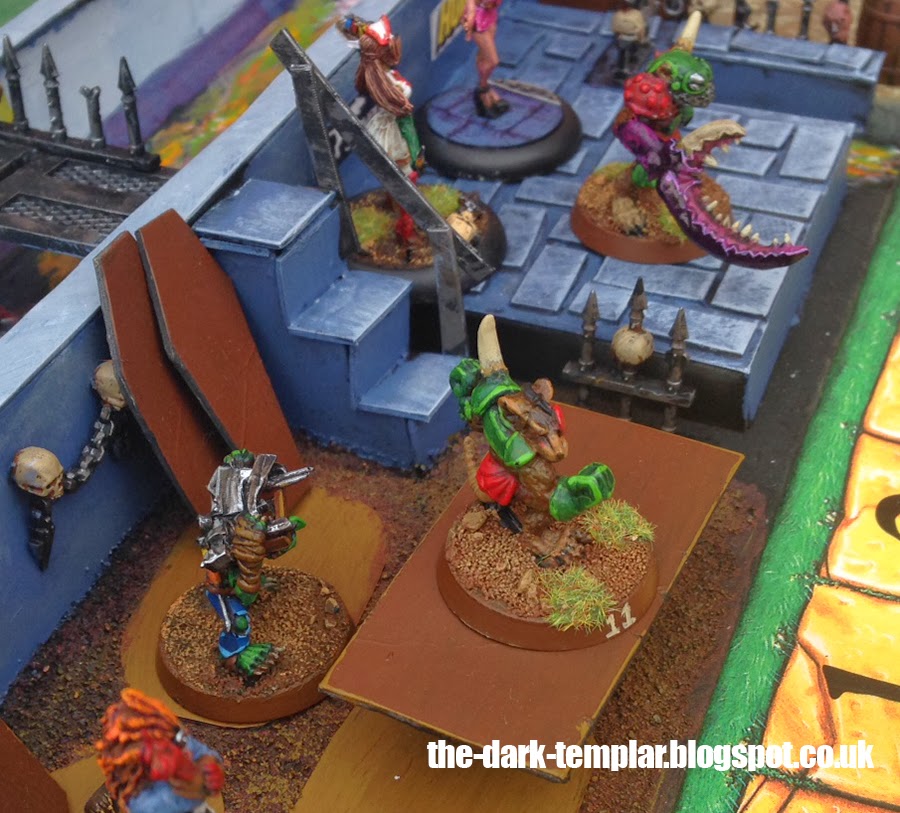 Then more drama – the first Death of our Blood Bowl campaign finally happened in match 6. Bull's number 11 Line rat was hit by Dark Elf Lineman Darat Shadowhawk and died, despite Bull's Apothecary roll. The Rats we slowly losing players to the KO box and the Dark Elves starting to muster a level of control. 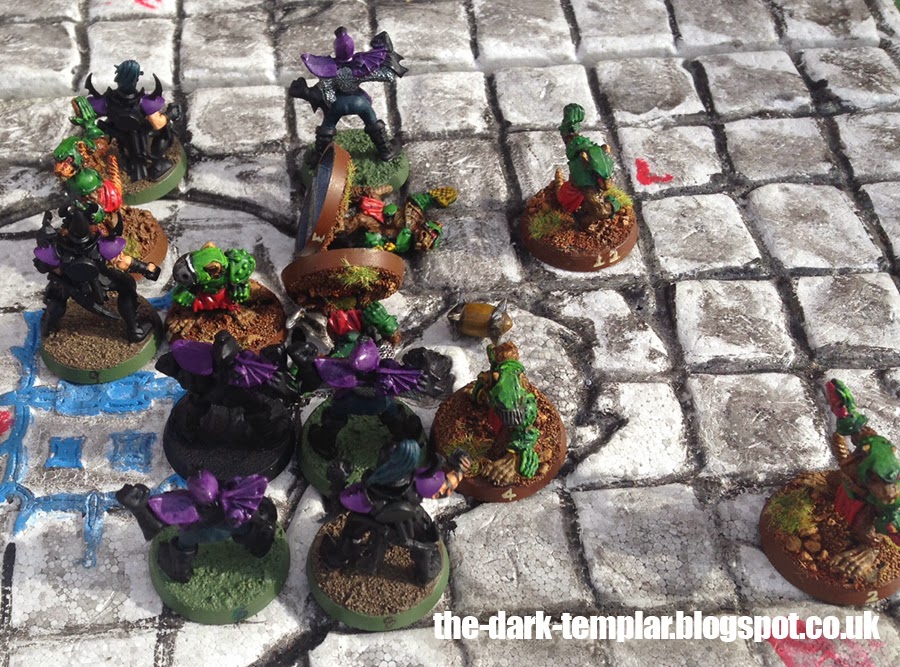 The smallest of openings and in came a blitz that had been threatened for a while. Down goes the Rat Thrower and out pops the ball. 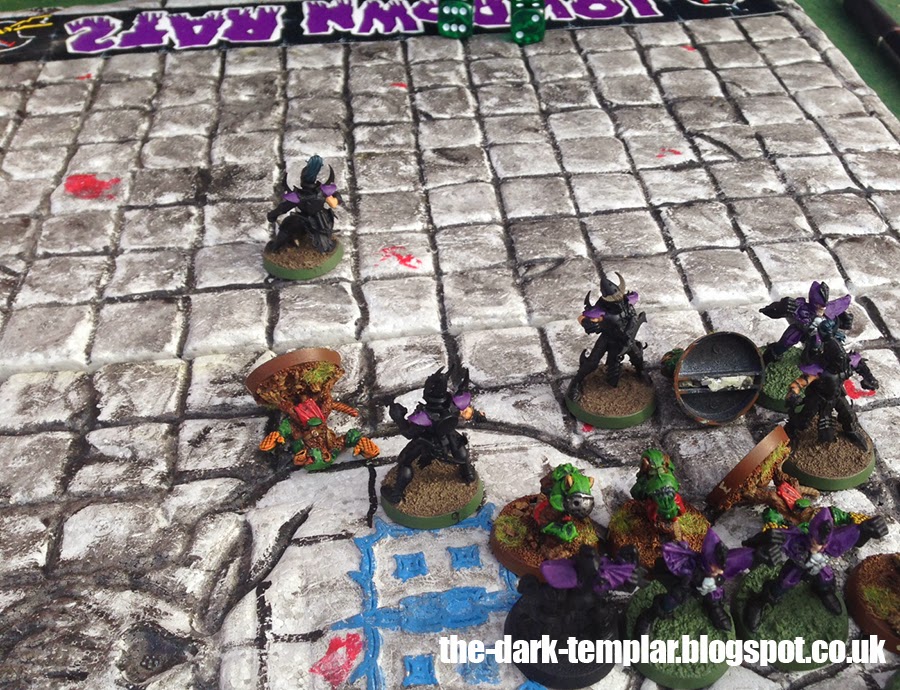 Cometh the moment, cometh the man. The legend that is Adin Heartrender seized his opportunity, like the hero in many a sci-fi movie. He charged into the Rat tackles zones, picked up the ball under pressure and skipped away towards the end zone. I had done pretty much everything I could to tie up the nearby Skaven.

Heartrender was unsupported but, as I saw it, only a single Gutter Runner could get to him (if he managed to pass his Dodge roll) and that wouldn't be enough to stop the score. Heartrender was 6 squares away from his third TD of the season and his second skill up, which would cement his legendary status.

As predicted, the downed Gutter Runner stood up, dodged out of the Blitzer's tackle zone and skipped over to Heartrender. No problem I thought, I'll blitz him in my next turn, which would be virtually the end of the half.

But then the unthinkable happened. Backed into a corner, Bull tried the most outrageous of moves with devastating results. 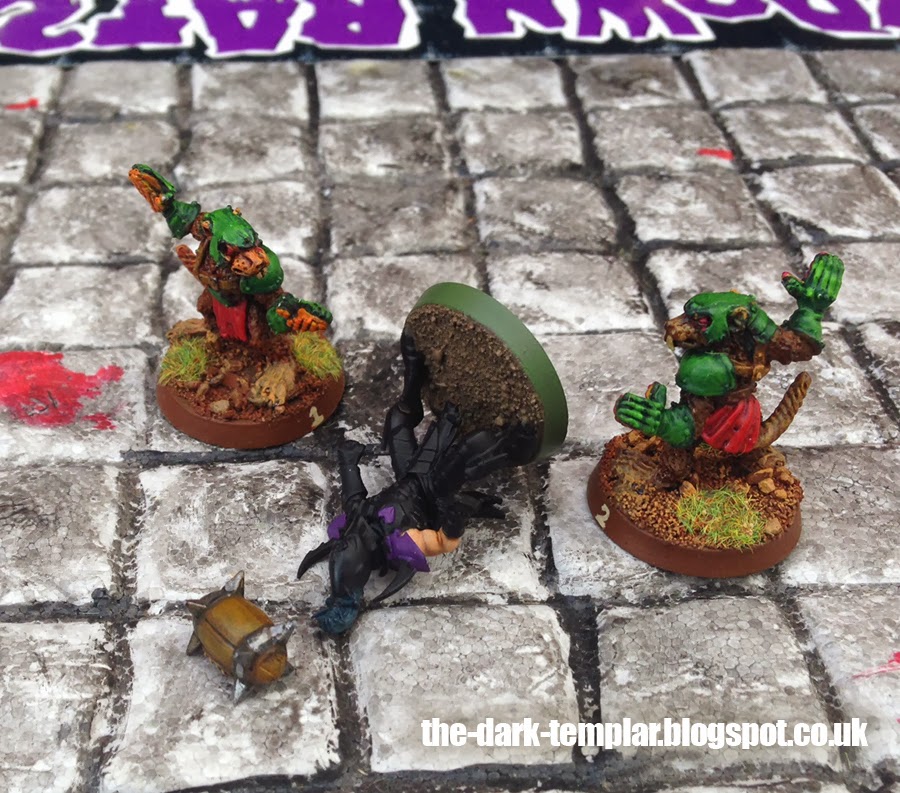 "I –seriously– don't believe it"

The odds of that happening were so astronomical it makes Las Vegas slots look like cash machines!

Bull's Gutter Runner grabbed the ball and in my following turn, try as I might, I couldn't knock him down. 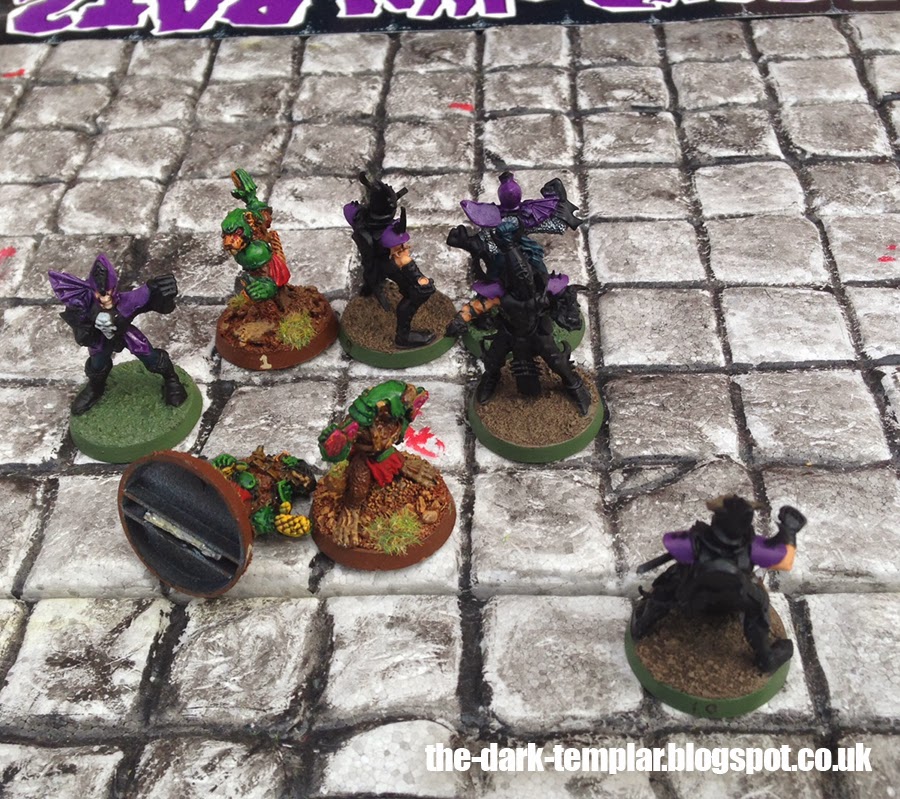 One turn each before half time, Bull decided the best plan of action was to pass the ball out of the danger area. Alas, I had two players adjacent to the path of the ball and Torel Dragonclaw (bottom-right of above photo) leapt up to snatch the ball out of the air. A nearby Lineman, Atal Starslayer, saw an opportunity and ran into the endzone, completely unmarked. 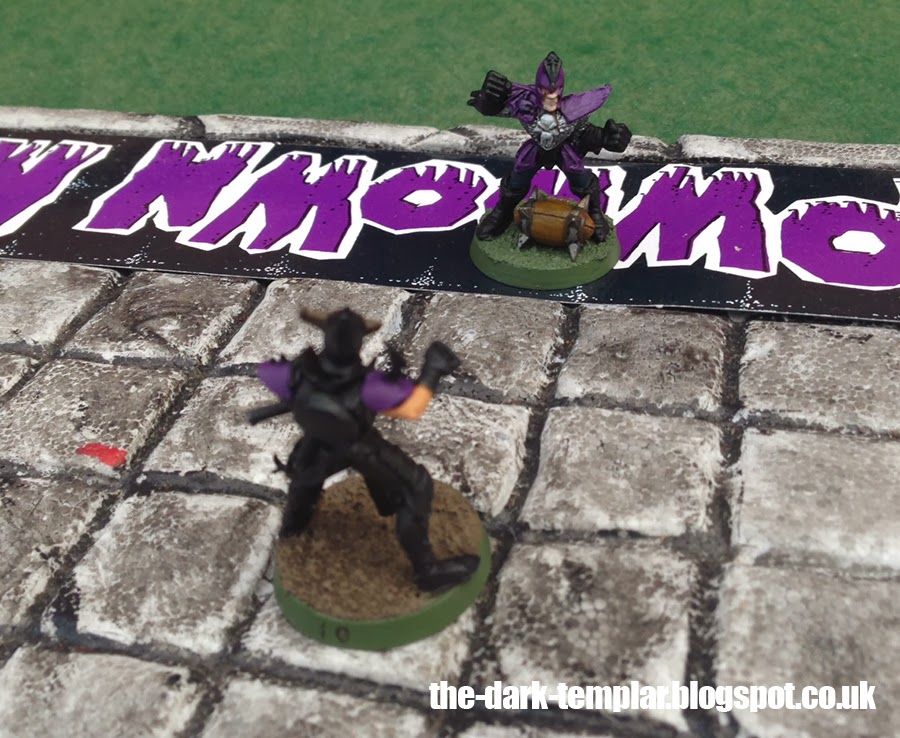 Dragonclaw ran towards him as far as he dare and threw the shortest of short passes to the waiting Lineman. Score. 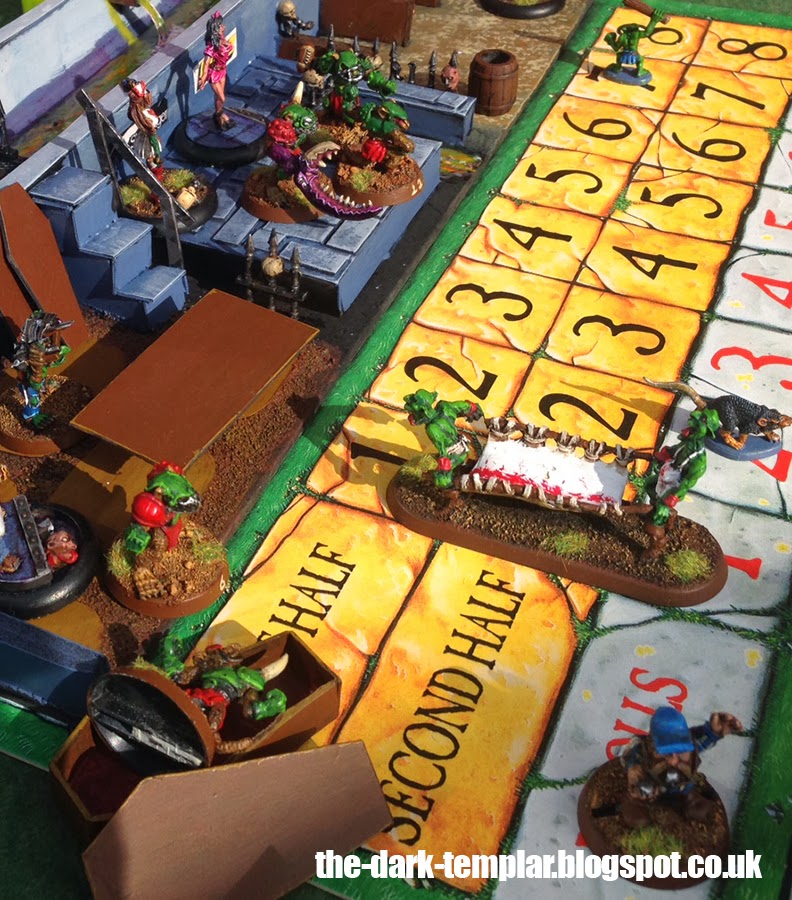 Oh my word, that was exhausting. We took a short break for lunch, giving us time to take in the drama of the first half. It was grim viewing for Boomtown Rats fans, they had FIVE off the pitch. In contrast the Dark Elves were only one down, albeit our hero Heartrender. We also had the lead and the Rats were kicking to us in the second half. 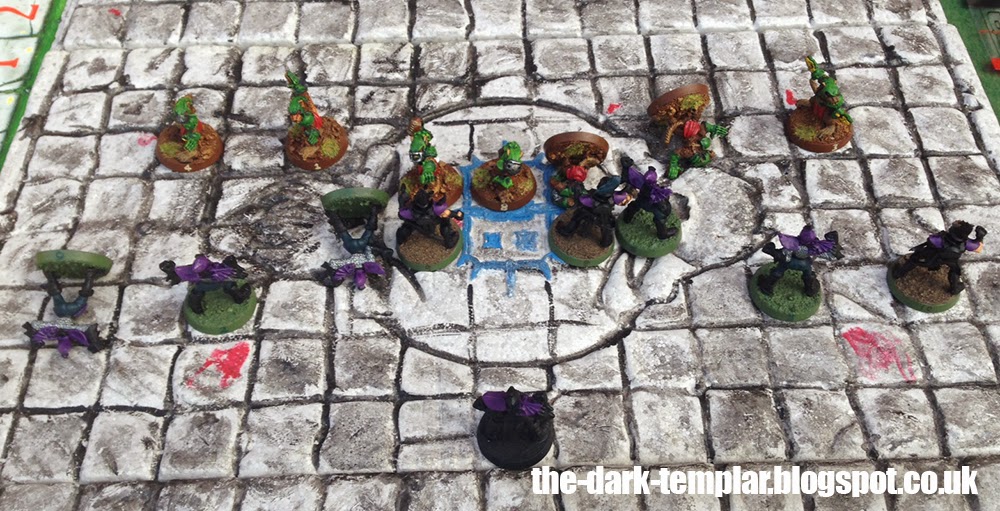 The second half saw the Rats with only their Thrower, two Linerats and four Gutter Runners on the field. Not ideal when trying to defend against a Dark Elf team at almost full strength. The Kick-Off Table proved the focal point by giving us a 'Riot', meaning players could get injured. Two apiece went down but, significantly, the Rat casualties were on the same side of the pitch which presented an excellent opportunity.

To add insult to injury (excuse the pun) Bull's kick scattered out of bounds, meaning I could give the ball to whomever I wanted to. I gave it to Blitzer Torel Dragonclaw (far right in above photo) who was almost on the halfway line already. 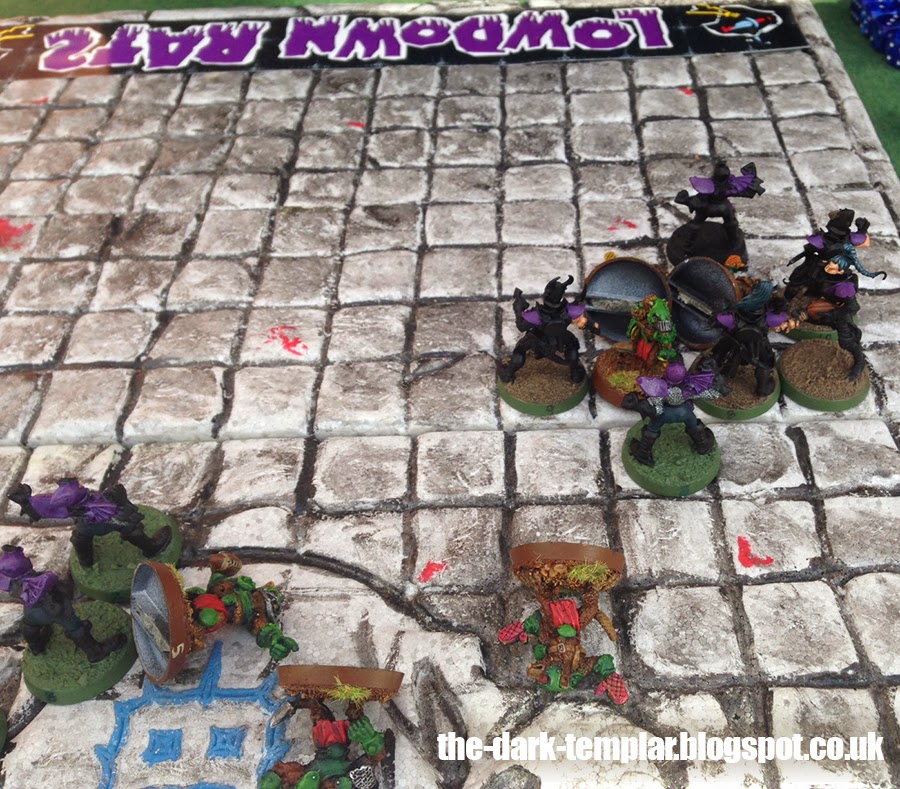 He bulldozed his way forward – black helm on the far right above – supported as best as possible by his team mates. The problem for the Rats was that the only players able to reach him were Gutter Runners and they were struggling to get decent hits in or around the ball carrier. The numbers were starting to tell for the Dark Elves and the Rats were running out of options.

I stalled for as long as I dare, then Dragonclaw strode into the endzone. Score.

I have to say I was feeling rather buoyant, despite my dead player, and in contrast Bull was doing his best to hide the despair.

Drama and controversy are never far away. 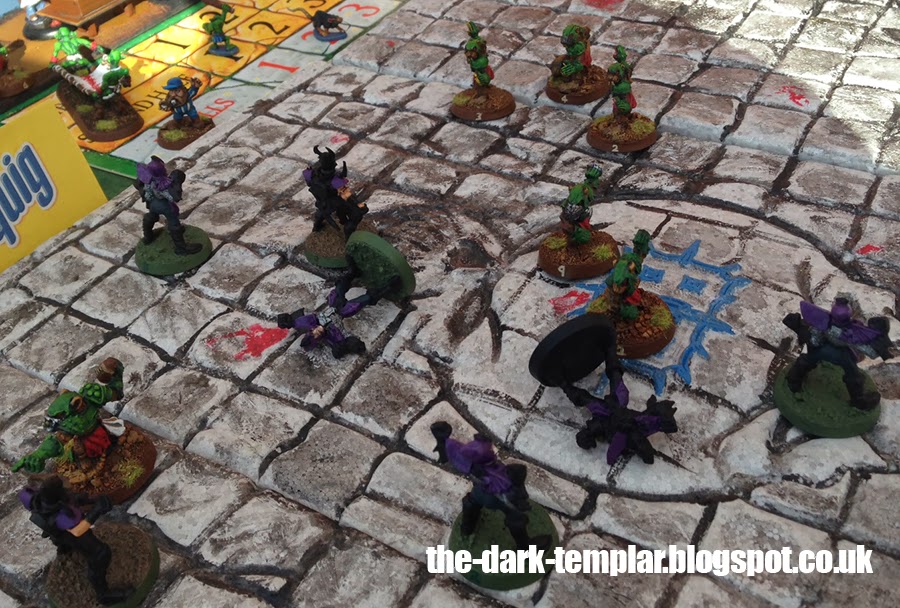 I kicked to the Rats, still outnumbering them significantly. The Thrower picked up the ball and fell back to relative safety, flanked by a couple of Gutter Runners. The other Gutter Runners skipped forward, but I had my eye on the ball carrier and a possible third TD.

We surged forward, downing one of the protectors and imposing multiple tackle zones on the Thrower. It was then that I noticed my fatal mistake.

I had left a single row of squares free, along the length of the touchline to my left. If the thrower could dodge out of the tackle zones, and the forward Gutter Runner do the same, there was the possibility of a pass to the endzone. It was very risky, especially in the rainy weather, but it was Bull's only option. 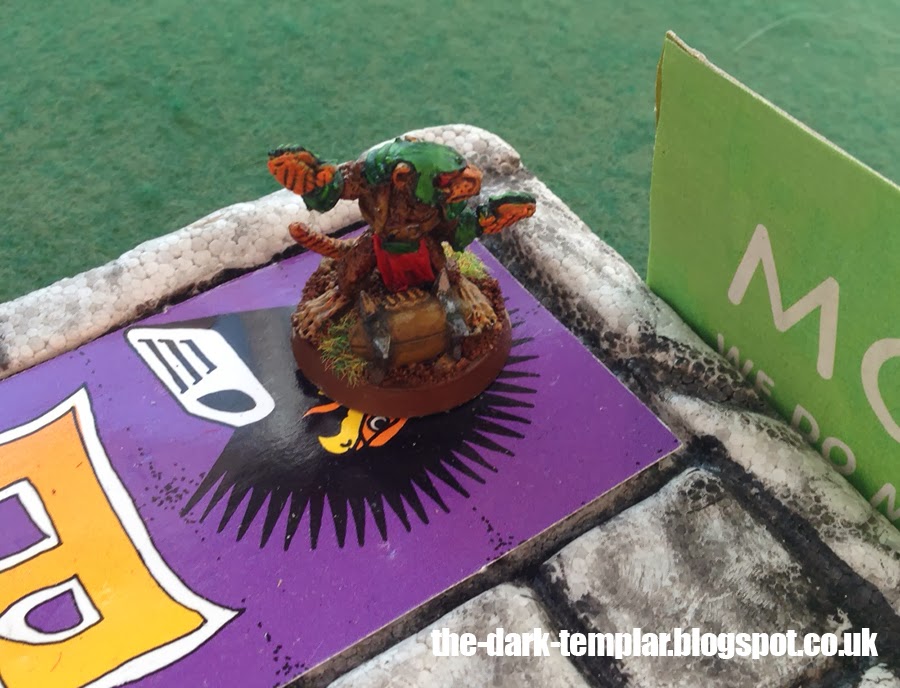 Despite needing a 6 to throw an accurate Pass and a 5+ to Catch, Bull rolled the required dice and the Rats were back in it, against the run of play. Score.

The Rats kicked to us again, but the tide was turning. All their KO'd players returned to the field, including 'the claw'.

I tried a refused flank tactic, so (of course) the ball bounced all the way up to the half way line on the side I hadn't covered. A mad dash ensued as I pulled my entire team across the pitch to surround my Runner, who had picked up the ball.

Things began to turn badly for the Dark Elves. Blocks were only Pushing, not knocking down, and I was starting to take casualties. Nenil Spinescourge became the second major loss, though luckily just for the remainder of the game. I was boxed in on all sides and this became a war of attrition.

Boom! Another lineman gets KO'd. I was starting to get overwhelmed.

In desperation I tried a one dice blitz with my ball carrier to try and offer some relief to the front line. Even with a re-roll she fell down, spilling the ball. Luckily it fell into the pocket behind my players, but a Gutter Runner got in and tried to pick up despite being in 5 tackle zones.

Fail. The ball spilled again and a mad pinball type scenario ensued as the ball bounced from player to player, with neither side able to catch it.

Eventually it fell into the hands of a Dark Elf lineman who handed-off to the Runner and we were back to square one.

Bull could do no more in his last turn and I just made a cheeky short pass in my last turn for an extra SPP.

A rather anticlimactic end to the most dramatic game of Bloodbowl we've ever played. To say we were both exhausted at the end would be an understatement. Lots of things to discuss after a game like that, but it will keep for another post. 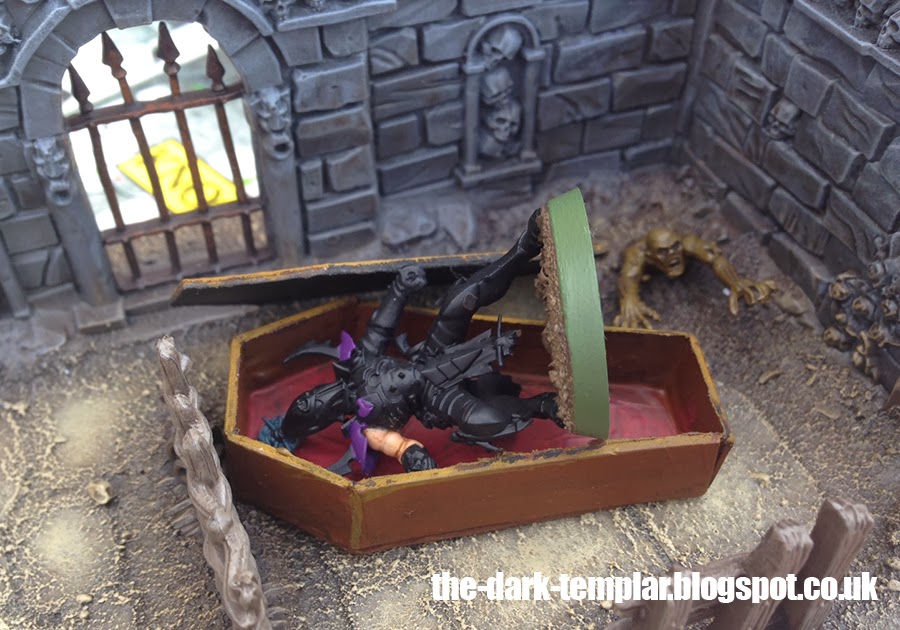 Let's just take a moment to remember the courage and heroism of our fallen team mate.

Maybe he could join my Undead team?