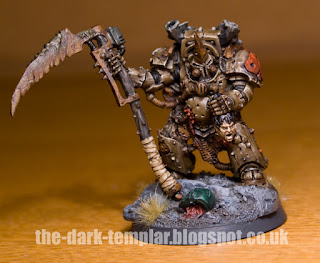 I've found that this Typhus model is one of those painting projects that will never be finished. There's always another highlight, shadow or detail to add. Even now, a week after 'completing' his armour I find myself layering more paint or washes into it.

It has been an absolute pleasure to paint. After the time, attention to detail and accuracy required for my Tale of 3 Painters models, this model has allowed me to be (relatively) sloppy with the painting, yet produce the exact result required. Plus, at the end of the day this is a gaming miniature rather than a display piece so you don't want him to be too polished. 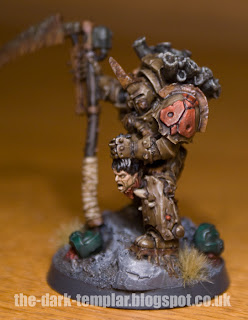 The base was painted with a Vallejo Basalt Grey and Black mix, then highlighted with the Grey. Final highlights were made up of the Grey with increasing amounts of White added. I then went back in with some brown and black washes, adding shadow and depth to certain areas.

The red fly was washed in Devlan mud (probably several times as part of the overall armour coverage) then highlighted with the Dark Flesh basecoat. Additional highlights were of Blood Red with a little Blazing Orange for the final edge. 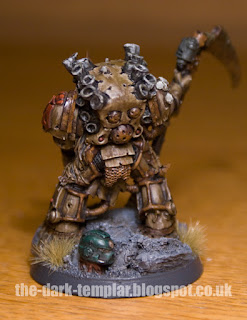 For the fungus-type pipe vents on his back I went all Privateer Press. P3 Cryx Base mixed with Black as a base colour, followed by a couple of layers of Cryx Base, then added Cryx Highlight and a little White. Once complete I gave the area a Black/Green wash. 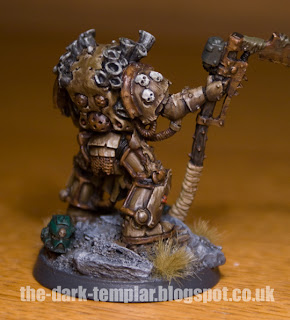 Similarly, the skulls of Nurgle on his shoulder started off with a Cryx Base coat, followed by a couple of layers of Cryx Highlight. I then added White to the mix but only applied to the uppermost surfaces of the skulls.

The shaft of his scythe was painted black with Burnt Umber highlights, the final highlight having a tiny bit of White in the mix. The wrappings started with a Burnt Umber, Ochre and Knarloc Green mix basecoat. I then added increasing amounts of White to the mix to highlight, with a final wash of Devlan Mud. 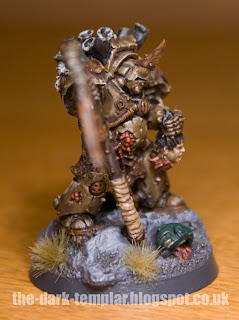 For the severed head I used my usual flesh mix, with a twist. Instead of basecoating Burnt Umber I used Cryx Base which has a greenish-grey feel to it. I wanted to get across the idea that the infections and diseases carried by Typhus's great scythe have an instant effect upon touching the skin, so by the time the head had been truly severed it was really starting to take hold, speeding up the 'dead look'. I added Vomit Brown to the mix and highlighted by adding white. I then washed the lower part of the head and all the recesses in a watered down Knarloc Green. It actually looks rather like stubble from distance, but it gives a sickly feel, which was the point. 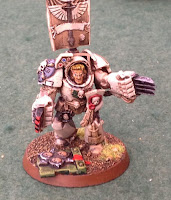 As tempting as it was to give the severed head blonde hair, to match Bull's Belial model (left), I decided Black was the better option, helping to add contrast around the armoured gauntlet.

Once I was pretty happy with how things were I got out my pot of W&N Indian Ink. This stuff is Black, I mean VERY Black – so much so that if you stare at it too long you feel like you're falling through space. It is the single best way to wreck your model. However, if you water it down A LOT it can add a great layer of shadow and depth. So, armed with a very fine brush I set to, re-defining the edges of armour, cracks and crevices, making sure I didn't overpaint anything accidently.

This model has cleaned me out of the last of my Devlan Mud wash – the end of an era. We will see how the replacement works with the rest of the project. I managed to keep a relatively tight palette of colours throughout this model, all of them quite earthy. By painting my Plague Marines two models at a time, a slight variation creeps into the unit which is great. For Typhus I took the basic recipe and made his armour slightly brighter across the board, without necessarily making the final highlights any brighter (if that makes sense).

Finally, inspired by Michael from 28mm Victorian Warfare and his Ryle model for our Tale of 3 Painters project, I took the plunge and added grass tufts to a model for the first time…ever! It's amazing what a difference it makes to the base, so you may start to see more appearing on my models in the future.