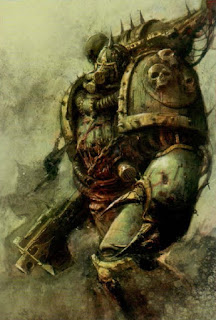 So after my first 6th Edition experience at the weekend I had a lot to think about. I have three and a half weeks until the full on rematch against Bull and his Dark Angels. From the moment I returned home on Sunday I have been list building and have got to a point where I have something I like. I'm not going to divulge the content of this uber list – Bull reads the blog too and I would like to leave a surprise or two for him on the day! 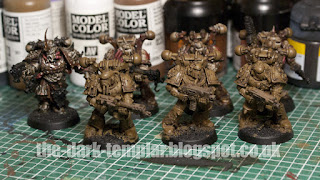 The other bit of cool news is that Bull had a belated birthday present for me (I haven't seen him for some time). It was of course 40k related and will probably feature in the game… more on this later. After all the building done in the last few weeks I was keen to get some paint onto models. The remainder of squad one got a basecoat to help encourage me to get them finished. 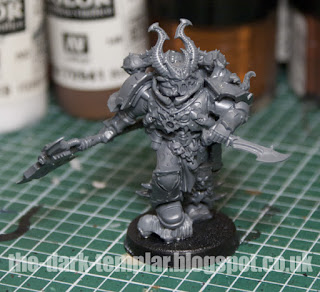 The fly in this particular ointment is that I have decided to save the cost of a Power Fist in this squad and replace with a Power Axe – this means my lovely painted champion will take a seat on the subs bench. He will, however, be replaced by the new Chaos Champion model that was part of my gift from Bull – he has a Power Axe and with a bit of greenstuff will fit in nicely!

The Terminators got some base colour and the two Power Weapon guys got their greenstuff finished, ready for undercoating. 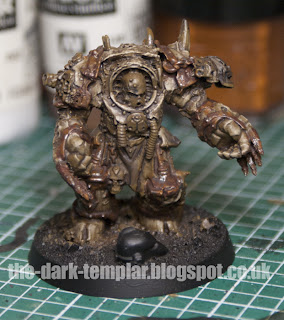 The Terminator Champion got a little more love. I started to get him painted up as he could be a key character in the army and I really like the model. I'm looking forward to getting this unit finished – it will look awesome.

I mentioned my gift from Bull and it was a corker! 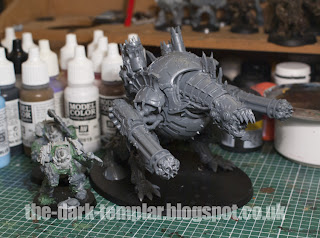 This model is enormous and was fun to put together, if a bit fiddly. The firepower output has a lot of potential for something approaching a daemonic Dreadnought. It is only BS 3 but the volume of shot should make up for this. 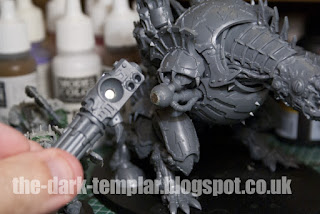 I had the foresight to have some magnets on hand while building him so that I can swap out the guns if needed in the future.

I can see me purchasing another one of these in the near future!