In The Box – Cryx Starter Battlegroup 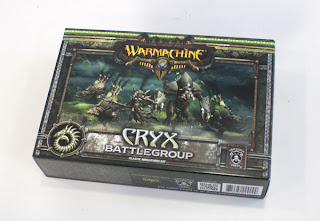 I don't read reviews of gaming stuff online and I certainly don't write them – so this is NOT a review…kinda.

I posted yesterday about picking up the Cryx starter box set for Warmachine – the new plastic version – and was so excited (a bit of a theme this week) that I decided to photograph and narrate my experience of opening up the box and sticking some bits together.

I have to apologise now if I come off as some kind of Games Workshop fanboy. This is far from the case but my only real experience of contemporary plastic kits are GW ones, I've built hundreds of them, so comparisons are inevitable. 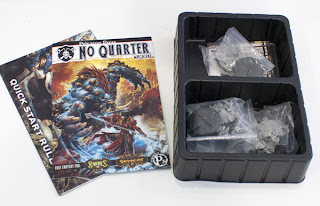 Upon opening the box I found the above inside: Quick Start Rules for Warmachine; a cut down version of No Quarter magazine (which was quite interesting); gaming cards and the models themselves in individual, sealed bags. No plastic sprues, building instructions or advice. 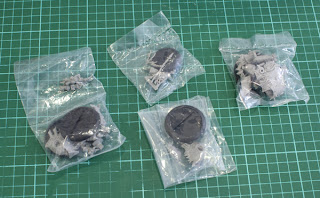 I decided to have a go at sticking together one of the Deathripper Bonejacks – small machines that bite, on a 40mm base. 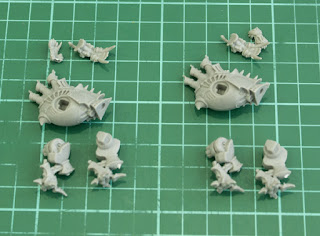 Now, I had been expecting sprues by the boatload full of hull pieces (left and right) that would be stuck together to create a hollow body for the machine – just like GW space marine dreadnoughts. I was very surprised to see the Bonejack body was a single solid piece of plastic – very reminiscent of Forgeworld resin kits. However, this kit looked simple enough and I jumped in with my plastic glue, expecting to be done in a few minutes – foolish boy.

The plastic cement had no effect on the sticking process – I might as well have been using water. I scoured the box and eventually found some small type suggesting the use of P3 superglue (or similar) when constructing these models. Very odd, and I have to wonder, would they not have been better going down the Finecast route and doing these models in resin – you're still using superglue and you could capture so much more detail.

The two halves of the Deathripper jaws were not co-operating and took an age to dry – my plastic cement was reduced to being a prop for the drying pieces. 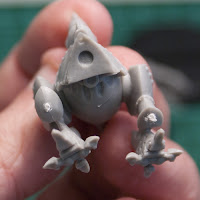 One thing I did notice was that, as nice as it was not to have to clip all the pieces from a sprue, the individual pieces looked like they had been twisted and pulled off a sprue by hand (see the knee pads in the above pic). This will involved some cutting and filing to correct but, more concerning, in some places the damage caused will need to be filled. 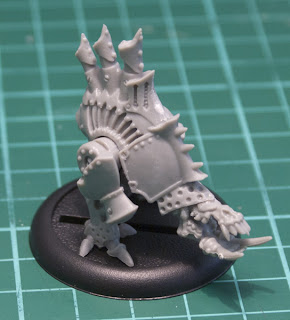 Eventually I got my first plastic Cryx model built. I decided not to glue him to the base at this stage – the bases provided are all slotta bases and I want to use a solid base, maybe even a resin one for added weight. Overall the model held its detail, though I will have to go in with a needle file and tidy up the mold lines. 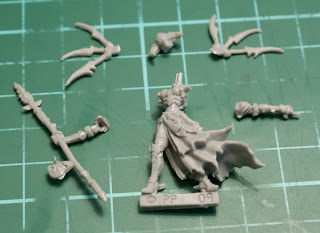 Next I decided to build my Warcaster – War Witch Deneghra.

This model actually had a tab to make use of the slotta base and, again, the build looked simple enough. There wasn't much room for personalisation and it seemed (rather like the Bonejack) very plug 'n' play. Of course I could have taken a scalpel to it and gone crazy with greenstuff, but I decided to leave that for another time.

Her staff was rather distorted and the model didn't have much detail compared to GW kits. This felt more like something you'd get in a board game. Her face especially doesn't have much detail so I may have to invest in an alternative metal version of this character – oh, Salute on Saturday, how lucky is that! 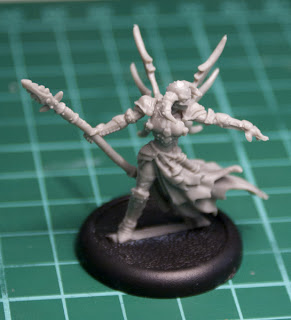 Deneghra went together easily enough and she will do as a starter model. Not terribly impressed by her though. I decided to call it a day at this point (I was at work after all!).

What did I think of the kit?

It was nice not to have to pin every joint like I did when I built the metal version all those years ago. The Bonejacks and larger Helljack seem to have a reasonable amount of detail on them (even if it is not super sharp) but I was disappointed by the Warcaster. Considering the kit costs the same (or possibly a little more) as the metal kit I'm not sure it's worth it as I will have to buy a replacement Warcaster before I'm happy – this one is not up to the job.

If you were to compare the detail on this kit with any standard Games Workshop plastic kit, this one is sadly lacking. In addition the GW stuff is generally very poseable, giving you lots of options when building multiples of the same model. The idea of these starter sets being plastic is superb; unfortunately the end result falls a little short of expectations – in my opinion at least.

I will wait until the battlegroup is fully built and painted before making a final judgement. However, I am now thinking I will not wait until May for the plastic Legion of Everblight starter kit and go with the current metal version instead. Oh well, something else to add to the shopping list!

EDIT:
I have since done some reading up on other blogs and discovered that my experiences with the 'plastic' kit is not unique and should, in future, treat it in the same way as resin (i.e. wash in soapy water, score the surface, etc.).