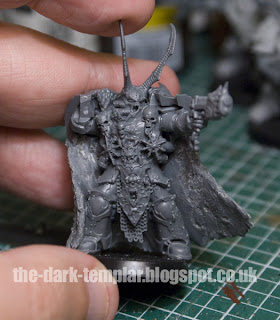 It's pretty much a shared opinion across the community that the Dark Vengeance models are rather lovely. They're also rather limited edition, or at least rather costly to replace, so it makes no sense on paper for me to hack them up into pieces. Yet that is exactly what I'm doing!

You've already seen my 'tweaking' of the Chosen into something more Nurgle-ish. Not a lot of hacking up, more a case of adding some contagion. Now it was time for the Lord to go under the knife for a comparatively extreme makeover. 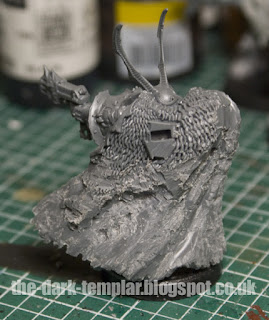 Once he had been stuck to his weighted base and had had his cloak and arms added I took the rather insane step of hacking off his beautiful daemon sword – a scythe is much more appropriate for a Lord of Nurgle. I then went to town on his cloak with the dremel. The main point of this was to remove the detail from the cloak, make the edges ragged and make the whole thing look a lot more worn.

When I put the tools down he looked like he'd been savaged. Needless to say I was feeling rather nervous as I was way past the point of no return – had I just trashed a lovely model? 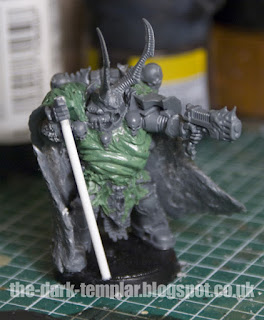 Next day, keen to prove I'd made the right decision, I ploughed on with the greenstuffing. I gave him some rolls of fat and added bits of mutation here and there. I also put a piece of plastic rod in place to form the basis of the scythe, which would be added later. I wanted to give the impression of him being bloated without going too far as he has a relatively small head and I didn't want him looking like a cast member from Beetlejuice. However, being the Lord of my Plague Marine army he had to look the part. A very tricky balance.

Rather than building my confidence in the decision-making process, covering up all the lovely armour in greenstuff made me very nervous indeed. Still, once you start out on this road you have to see it through. 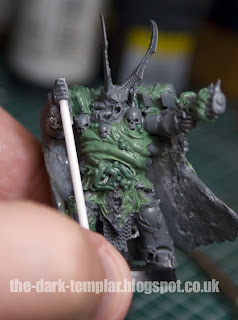 I had a bit of a revelation overnight after adding the greenstuff – I would drill a massive hole in his body! And so I did. I then rolled out sausages of greenstuff and literally stuffed them into the wound. I filled the gaps with various sized balls of greenstuff which I also dotted about his torso. Things were finally starting to improve. It seemed that the devil is in the details and by adding little bits here and there I could give the impression of rot and disease without the need to go over the top with bulk.

Still lots of work to do and I want to add more details, given that he is the main character in the army.