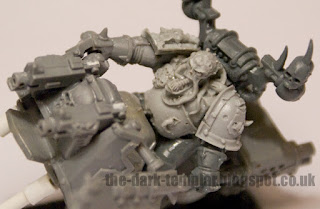 I spoke last week about a desire to build some Nurgle bikers. I need something fast in my army and at Toughness 6 (!!) these guys will do quite nicely thank you. Whilst I see a lot of people building bikers with meltas and power fists to go tank hunting I think I'll go down a different route.

Nurgle bikers are not the same as Plague Marines on bikes, they're simply normal Chaos Marine bikers with an extra point of toughness. This means that they don't get a bonus 'feel no pain' save, no blight grenades and they're initiative 4 not 3. The implication of this last point is that they will be going (mostly) simultaneously in combat with Imperial marines (looking at you Dark Angels!). Why then would I hamstring myself back to initiative 1 with a power fist or power axe when I'm likely to be outnumbered 2 or 3 to 1 and mostly likely be dead before I get to hit? Toughness 6 is great, but hits will land if rolled in sufficient numbers – white dice or not! 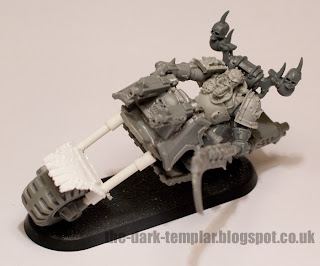 I want this bike unit to be a distraction to go out early in the game and take the heat of other units, maybe even assault a devastator or command unit to slow them down or hamper their effectiveness. With that in mind I have decided to go with a power weapon/flamer combo.

As you can see with my Champion model here, I gave the bike extended front forks and have added my own custom front mud guard. It's all looking a bit light weight at the moment but this is the pre-greenstuff stage, so all types of boils, rot and growths will emerge soon enough. I may even add some barbed wire and chain that I have kicking around (somewhere). 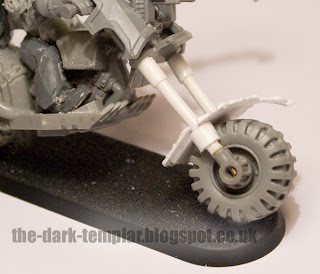 For the Champion himself, I've used a leftover Forgeworld body and shoulder pads and added standard marine legs instead of the ridiculous ones that come with the bike. I also managed to find a spare Ogre weapon, which looks far more nasty than a standard power weapon and, at a push, could represent a power axe when needed.

So at the moment the bike is looking ok but, as we've seen with my previous Nurgle projects, the greenstuff stage will change things completely. I have also added some pennies into the base to weigh it down and already it has added gravitas to the model when you hold it in your hand. Just how a model should be.