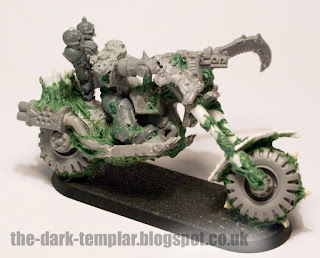 My Nurgle Biker Champion is virtually complete now as far as the building goes. I will no doubt nip and tuck some details before basing him and undercoating. He's a little more converted than I was originally going for but as the champion he has to stand out so I'll get away with it. The challenge will be to get the rest of the squad looking coherent without being as heavily modified. 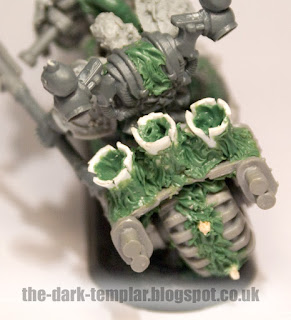 The main addition was the fungal vents at the back of the bike. I had to cut away the back of the seat in order to fit the rider on, so needed some sort of visual replacement. I was going to convert the exhausts into fungal vents but they're a bit small to begin with and I didn't want to open the 'can of worms' that is major converting surgery, so this is the compromise.

I also added spikes to the wheels with bits of cocktail sticks, trimmed right back. I intend to paint them up as bone rather than metal so that it feels more organic. 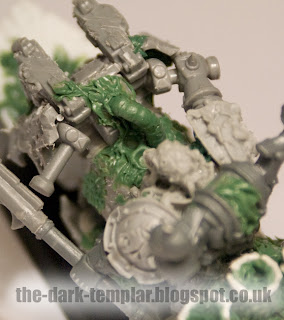 I didn't think that Nurgle biker needed any kind of display or readout to ride this thing so the screen had to go. I tried a new technique I recently discovered – using a comb to roll out greenstuff, creating this piping. The impression is a bit weak on this one but the theory works well. 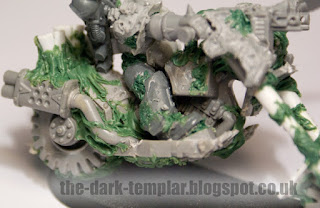 Elsewhere on the bike I added growth and mutations to disguise the original machine a little. I still need to drill out the exhausts and such but he is pretty much complete. On to the paint!