The Orks Are Coming… 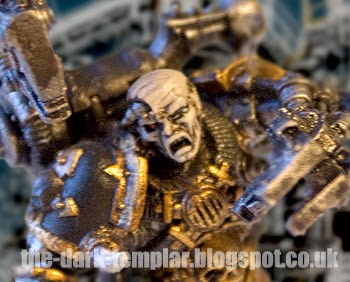 The mechatendrils weaved about Warpsmith Krosse in an agitated manner. The planetary communications array that he was overseeing was likely to be the initial target for the incoming Orks and this placed him very much in the front line.

He was not afraid of the Orks, he had killed thousands in his day. They were brutish and stupid and had no appreciation of technology. They were like hulking children, blundering their way through the galaxy with no logical thought or plan. No real threat to anyone except the infirm and incompetent.

Still, he had to make sure they didn't take out the array… or worse, capture it. The hierarchy would not appreciate any failings on his part, but he had several days to prepare and he would be ready. He was agitated at the fact that he had allowed himself to be exposed like this, away from the main battle force. There would be plenty of opportunity for glory though, and the gods would be watching.


The Iron Warrior tanks are getting ready for battle, the troops will be looked at soon. It's all starting to come together nicely in time for Sunday's opening battle!