The Vultures Circle The Battlefield… 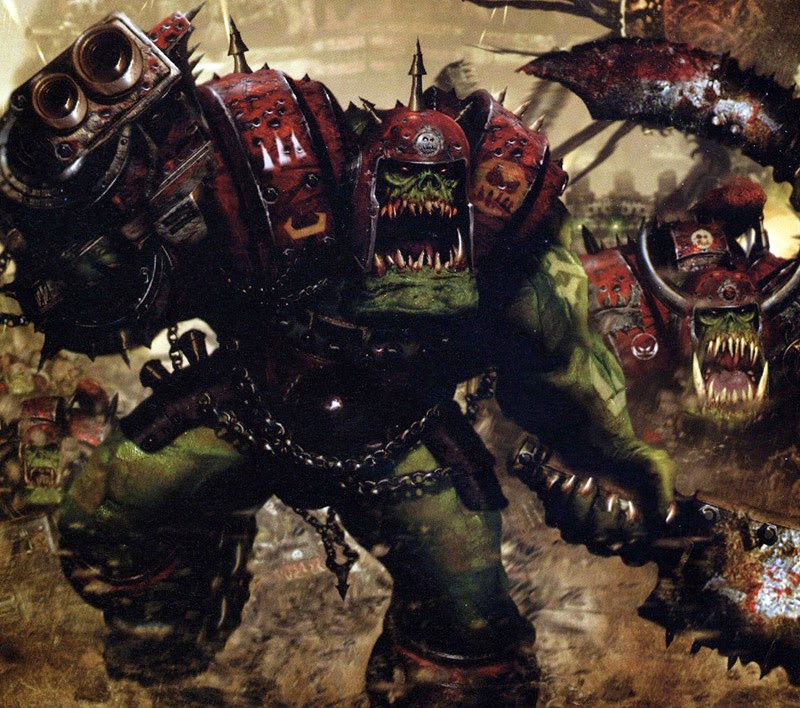 As the vultures circle Sunday's scarred battlefield… what did we learn and where do we go from here? The bottom line is that the final result went in favour of the Orks, but the Iron Warriors fought tooth and nail (for the most part) and things were not certain until the very end. Let's run through the Iron Warrior army and see who the heroes were. 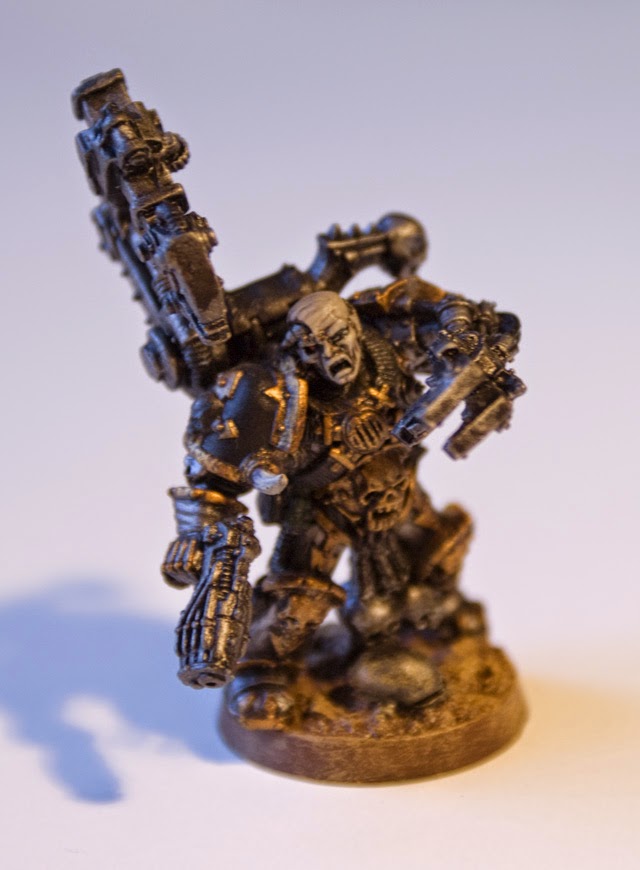 Warpsmith:
His original role was derailed before we'd deployed so he was at a bit of a loose end. He started the game in a Rhino with the Bezerkers. He managed to use his flamer on a unit of Boyz, killing a handful, then spent the rest of the game running back to the defensive line where he failed his final charge move. Not a good performance really for 110 points, but to be fair the fault was mostly mine due to indecision.
Rating 3/10 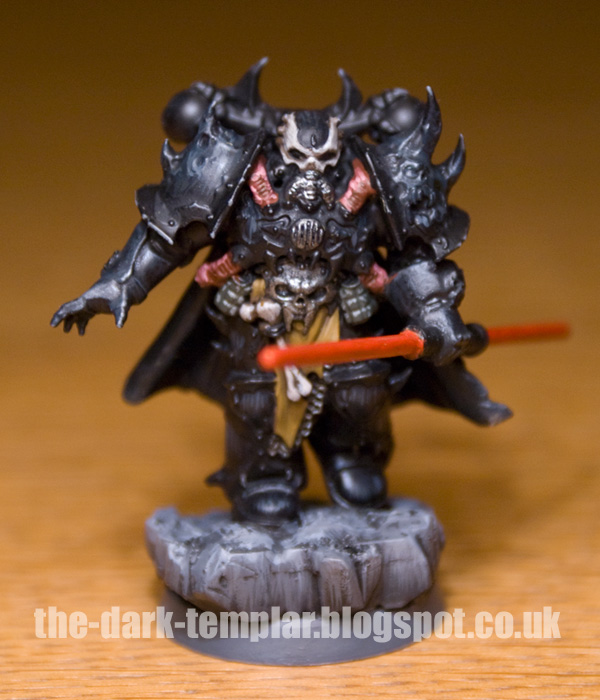 Sorcerer:
A late addition to the army list who ended up with the Bezerkers as well. He was popping off witchfire spells left and right, managed to kill a Meganob and a few Boyz. He killed a few more in combat. Again, he was running back to the line when he copped a rather large blast template on his head and died.
Rating 5/10 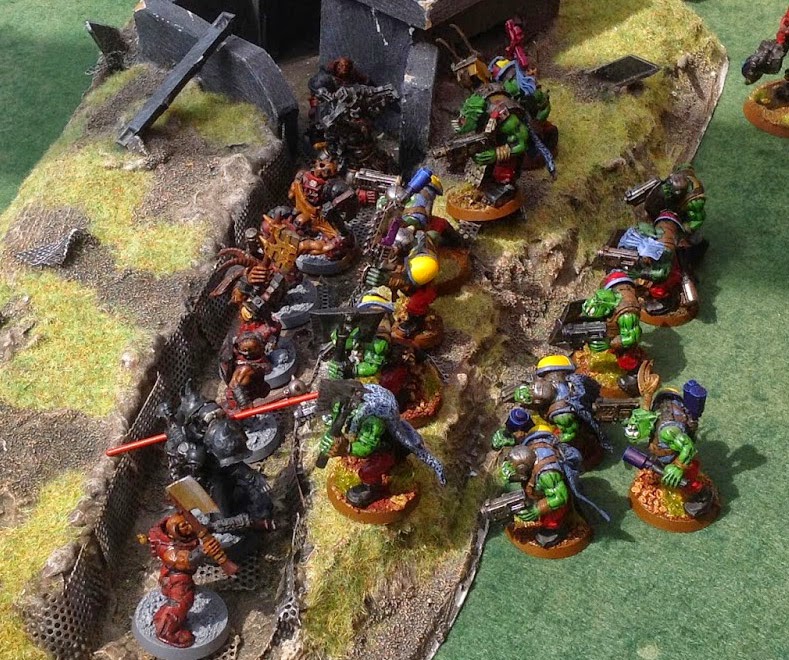 Bezerkers:
Taking 6 Khorne Bezerkers in a Rhino seems to be something of a crime in 7th edition. The fact that my little combat monsters can't actually charge into combat on the turn they exit their vehicle is a nonsense. The "Rhino Rush" was a common tactic in the old days and there were counters to it so disabling melee units in this way makes no sense. On the day my Bezerkers took the charge of a unit of Boyz and killed them all. After that their contribution petered out.
Rating 5/10 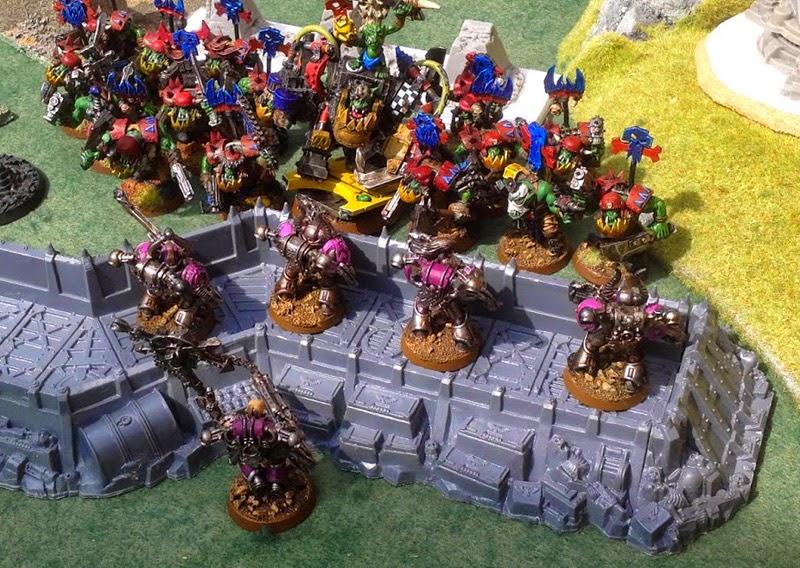 Noise Marines:
Did well defending the line against the deep striking Ork units, contributing to a lot of deaths. Was the first unit to get hit by the Warboss's retinue and was wiped out – didn't get to attack because we did the combat wrong. Had they been positioned a little better they could have contributed more.
Rating 5/10 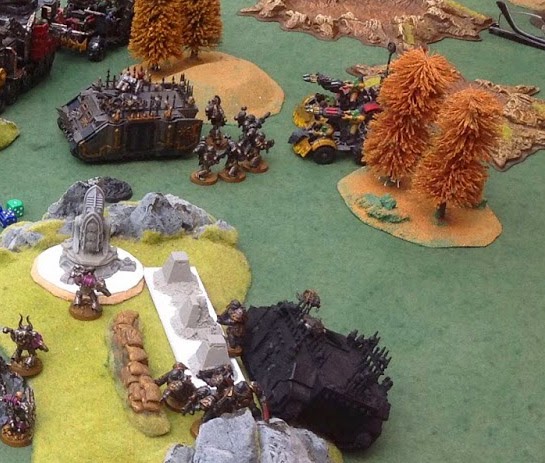 Chaos Marines:
The idea was to have five guys with a flamer in each unit to grab objectives and toast the Orks. When Bull decided to completely ignore the objectives and just go for the Comms Dish their role changed. One unit went forward and was ultimately wasted. The other two came back to defend the dish, burning many, many Orks before they made the fatal mistake of charging into combat. The Havoc Launchers on the Rhinos were a waste, the extra combat weapons essential, but overall not a bad showing. The flamer marines were that stand out models here – very glad I sat up until midnight to build and paint them!
Rating 7/10 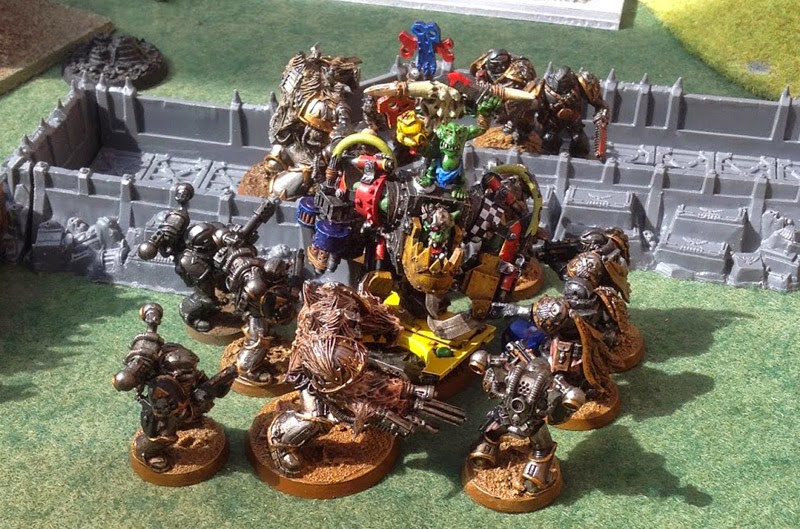 Obliterators:
One guy died in the first turn without firing a shot. The rest of the time the two remaining Obliterators were marshalling the back line, burning anything they could. They should have finished off the Warboss and Painboy in the end – Bull's ability to consistently roll 5+ Feel No Pain saved their lives. Eventually, their luck ran out and the Warboss's klaw ended them both. Not a lot more they could have contributed.
Rating 8/10

Predators:
Their Soulfire upgrade was a waste of points because I forgot about it! The terrain layout also meant that their line of sight was restricted, especially as one of them imobilised itself in a wood! What they did shoot at they killed for the most part, although there were some key misses in the last few turns. The imobilised Pred had the chance to kill the Warboss at the death, but managed to miss with almost all its dice.
Rating 6/10

Fortifications:
The Defensive Line was a mixed bag – it saved the lives of a few of my troops but similarly saved a few Orks as well. Jury is still out but I have no specific complaints about it. The Tank Traps were a genius addition. Preventing the Ork vehicles from getting right up to the line proved a big success and combined with the other terrain on the table made things difficult. The 50points spent on the Quad Gun however was a complete and utter waste. It never fired a single shot all game – I need to read the rules better.
Rating 5/10


The next battle takes place at the Citadel Forge and is a 2500 point game. No date booked in yet but that doesn't mean we can't start to think about battle plans and army lists. 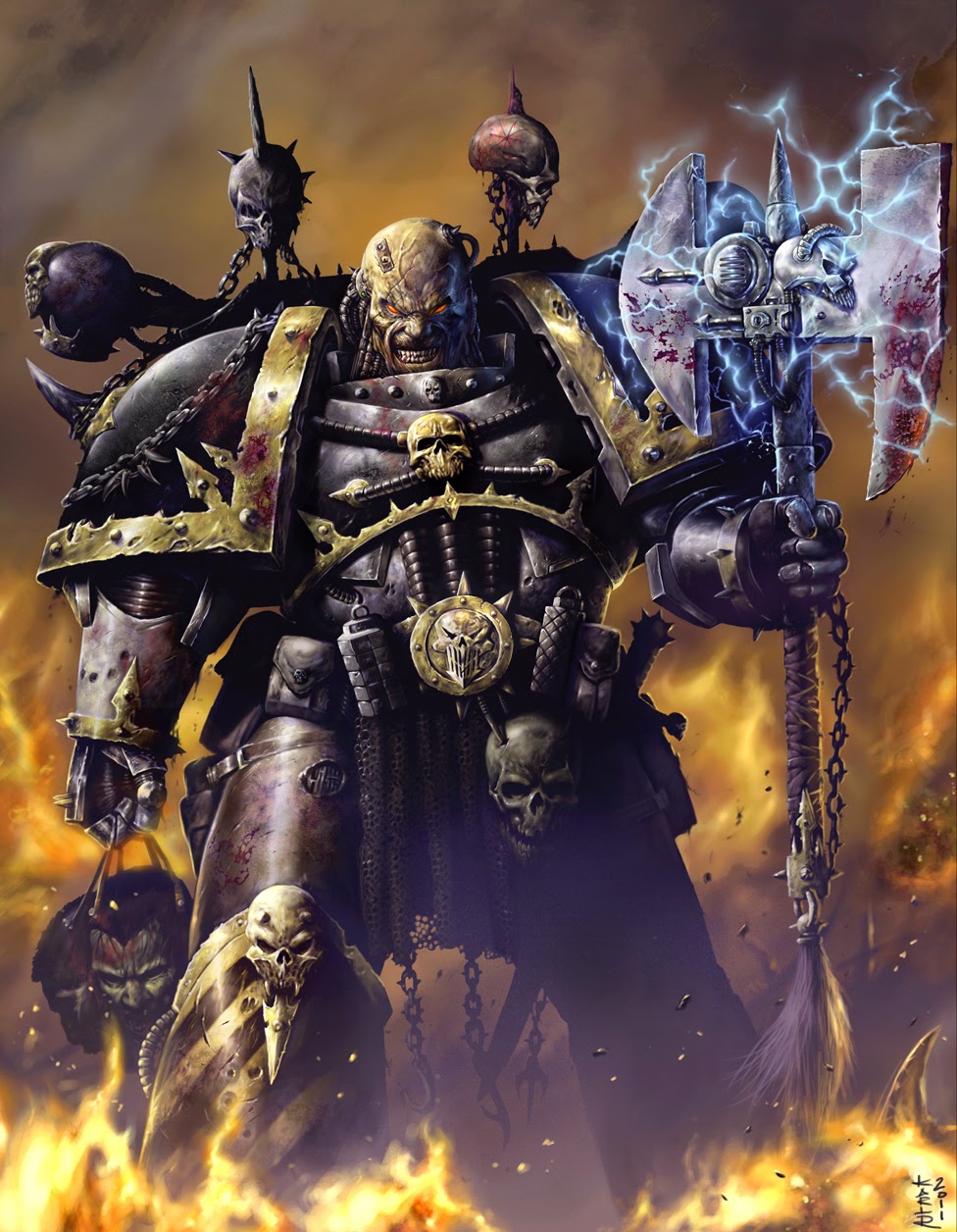 The one thing we learned from Sunday's game is that 7th Edition 40k is a game of three attack phases – Psychic, Shooting and Melee. The psychic phase is very random but has the potential to be quite devastating if the dice are on your side. You wouldn't want to rely on it though and I see it more as a bonus round of shooting or buffing. The Shooting phase is where it all happens and having a poor round of shooting will hurt you as much as a good round will hurt the enemy. This is the phase when it all happens and each turn revolves around this. The Melee phase is, well, rather broken to me. You can set up an initial charge – as Bull did – but if successful you can't then move into the next enemy unit, you have to sit and be shot for a turn first. My Iron Warriors were wiping out a unit a turn with their shooting so if you're facing a 'shooty' army then you've not much hope of surviving. I see melee more as a mopping up exercise, which is a shame. One of the pivotal aspects of the game is a shadow of its former self. Still, this doesn't mean you should ignore it completely.

As for the next game – will we see the Warpsmith? Not if he knows what's good for him. I don't think the Chaos commanders will be too impressed with the defence of the Comms Dish. The forge is where the Chaos forces create all their fighting machines, so it's definitely in the Ork's best interests to see it shut down. However, it's likely to be heavily defended, especially now… but who will the defenders will be?