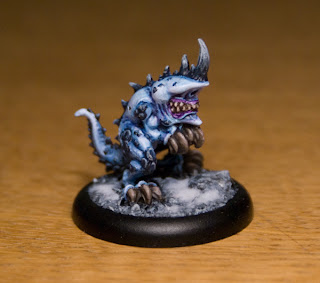 Rather than finish Lylyth, which would seem the more sensible thing to do, I spent the little painting time I had this Bank Holiday weekend painting Shredders. With four of them to complete I wanted to get a couple done before tackling the monstrous Carnivean model. 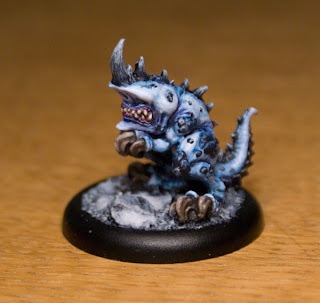 The skin had been highlighted already to almost white, in time for my tutorial Hordes games, so needed little attention – it was onto the details. After painting all of the scales and spines Black, with some Coal Black mixed in for good measure, I set about highlighting with two stages simply adding more white each time. These were coated in an undiluted wash of GW Asurmen Blue, using the wash to add shadows to the skin as well.

The gums were painted GW Lich Purple (I forget the name) before being highlighted with added white, then washed in GW Leviathan Purple. Teeth and claws were given a Black/Burnt Umber basecoat followed by a Burnt Umber highlight. Additional highlights were done by adding Ochre to the mix then adding white to that mix. The teeth were given an additional highlight with an off-white mix of the same colour. Both teeth and claws were given a GW Devlan Mud wash once complete.

The base was given a Black/Basalt Grey basecoat followed by highlights of the Basalt Grey and additional white. Once all this was done I got to use my new snow flock. After doing some reading online I found my technique of choice – for this first outing at least. I mixed my GW Snow flock with PVA glue then added it to the base with a tooth pick. It's very thick so needs some coaxing into place. I found adding a bit of water to the base first made life easier. Once it dried I did lose some of the coverage and vibrant white colour, so I may add some white paint to the mix next time. 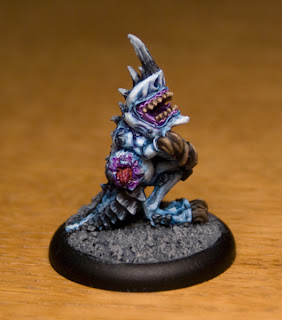 Yesterday I decided to try and get a second Shredder finished before the extended weekend was done. I thought I'd have a go at the one-legged Shredder as a bit of fun. The painting technique/palette was the same as the first critter but obviously with the added interest of the amputated leg. 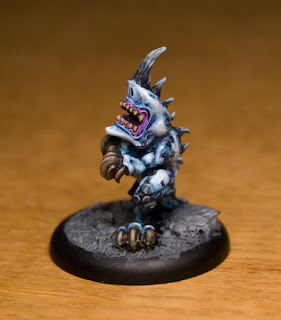 As you can see he still needs his base repainting in line with the first Shredder and snow added. Now I see the two Shredders side by side it's clear this second guy needs another highlight on his teeth as well as a couple of other places.

All in all it took a couple of hours to paint each Shredder. The question is, can I transfer this technique and palette successfully onto the much larger Carnivean model?
Posted by The Dark Templar