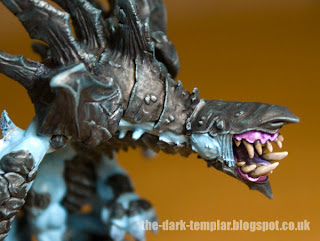 Having put together my Legion of Everblight starter box, painted my way (mostly) through Lylyth and a couple of Shredders, I was really looking forward to giving the monstrous Carnivean the attention his stature deserves.

I knew it was going to take a long time to complete. I had done his skin in the same way as the Shredders – highlighted to white – but the mass of armoured plates was intimidating and his weight was not making things easy. 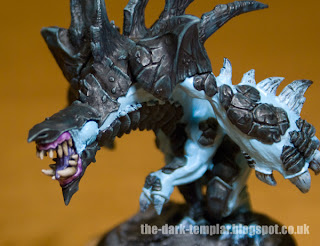 I basecoated the armoured plates with a mix of Black and Coal Black. I then worked up highlightes using Coal Black and then by adding some white to the mix. This was washed with Asurmen Blue then Black to dumb down these highlights and add some depth. I also painted some Black into the gaps between plates to add shadow. The whole process took several hours spread over Saturday evening and Sunday afternoon and, to be completely honest, got a bit tedious in the end. However, I'm pretty happy with the end results even though some of the painting is quite clumsy. 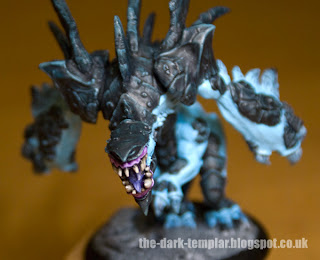 The drybrushing and washes applied to the armoured plates pretty much destroyed the painting on the skin, so I had to go back in and repaint the body in Sky Blue, to effectively start this part again. As you can see in the photos, his skin needs re-highlighting back up to white then washing with blue and purple to match the Shredders' scheme.

I decided I wanted to finish the head before calling it a day, so concentrated on the tooth-filled maw for the last couple of hours. The Carnivean's claws need completing as well, and I will use the same palette for them as I used for the teeth – Black, Burnt Umber, Ochre and White.

This has been quite a change from the norm. I haven't painted something this large since the days of my Khorne Bezerker army. The weight of the metal model was inconvenient – I was in some danger of dropping him on a number of occasions while I painted details. Having said that, the added weight of the metal does give him a sense of gravitas appropriate for his station that a plastic alternative just does not have. I'm pretty happy with him so far, ask me again once I've finished his skin.

Looking forward to seeing him finished with the rest of the crew, but I won't be in a rush to paint another heavy warbeast anytime soon.