Ladies and gentlemen, may I introduce to you Lylyth, Lylyth and… Lylyth.

Yes, I love this character so much I bought all three poses.

Lylyth far left is from the starter box, middle Lylyth is the alternative sculpt and Lylyth far right is actually Epic Lylyth, who has a different set of skills and spells.

I have started to accumulate reinforcements for Lylyth's Legion of Everblight warpack. Unfortunately the rain has stalled any painting progress as I can't spray undercoat anything. For those unfamiliar we have, from left to right, Raek (light warbeast), Forsaken (solo), Nyss Shepherd (solo) and a Nephilim Bolt Thrower (light warbeast). There are also some Harriers (lesser warbeasts) still in their packet but I need to clear space on the tray before starting on them. 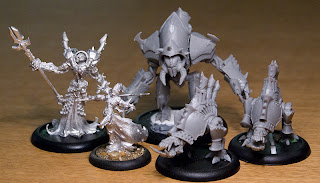 My fledgling Cryx army has not been idle either. After the disappointment of the 'plastic' Deneghra model, I bought a new warcaster as well as some other stuff at Salute. Again, from left to right, we have warcaster Iron Lich Asphyxious (or 'Gaspy' as he's know on the net), a Warwitch Siren (solo), the plastic Slayer (helljack) and the two plastic Deathrippers (bonejacks). There are also some plastic Nightwretch bonejacks that need building but, again, space is at a premium and Legion have to take priority.

With any luck the sun will come out at some point over the bank holiday weekend and some of these models will see paint!
Posted by The Dark Templar