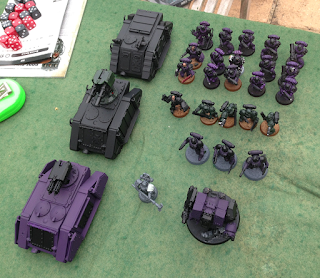 After a month of patient waiting and reading, last night I managed to get in a game of the new 8th Edition of 40k.

The night before I had been up late, feverishly getting some colour onto models. I managed to get some black and purple painted (or rather slapped on base colours) onto most of the models I intended to take. It didn't look great but made me feel better. The main focus was the new Reiver models. Painting an undercoat over the blue plastic turned out to be a challenge – I should have sprayed them perhaps, but I didn't want to obscure the 'soft' details any further. I have to say I am very much looking forward to painting them properly at some point. They will look very cool. 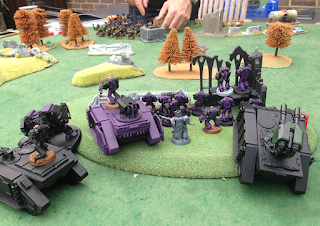 Bull and I put together lists of 50 power points. I took an ad hoc collection of Dark Templar marines and I was facing a massed horde of Orks, with a Battlewagon. I tried to take a range of models to cover various facets of the new rules, including Rhinos/Razorbacks, a Dreadnought, some Tactical marines with Missile Launchers and Plasma guns, and a Librarian.

Up to this point I have struggled to visualise how the game would play, something I'm not used to. The one overriding conclusion Bull and I have come to is that we've got to unlearn a lot more than we have to learn. We found a lot of the rules didn't make sense, or just felt downright illogical. Other times there seemed to be glaring gaps in the rules and there were quizzical glances shared across the table. 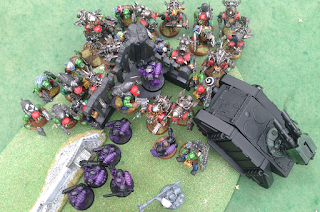 For example: It felt wrong that a vehicle speeding into a massive group of Orks can only score a melee hit on 6+, whilst the return hits were 3+ (I'm guessing it's a size vs size thing). Terrain seems to have been virtually ignored in the rules other than a reference to cover. Is there such a thing as difficult terrain anymore? When a unit arrives from Reserves is it considered to have moved for Shooting purposes? The idea that a group of 30 Orks shooting pistols can take down a Rhino feels silly.

Like I said, we have a lot to unlearn. This edition of 40k is an entirely new game and cannot be compared to previous editions. Something as straightforward as not thinking of vehicles as vehicles, but rather a large marine with heavy weapons and lots of wounds – vehicles as we knew them don't exist. It was easy to slip into old procedures or rule interpretations and that was more problematic than the new rules themselves. 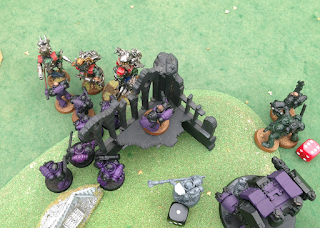 Having said all that, I think there is a lot of potential here. The current 'Index' armies feel quite bland, though we are trying to keep things as simple as possible to grasp the core mechanics. I came away from tonight's game with the feeling I used to have back in the days of 4th edition game nights – eager to pour over stats and trial new combinations and units. We definitely had an interesting opening game, that probably produced more questions than answers. 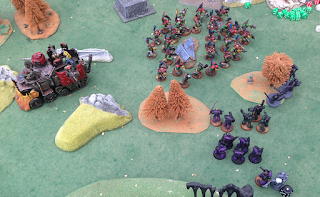 But who were the heroes and villains this evening for the new look Dark Templar?

My Assault Cannon Razorback has a lot of potential, and Bull killed it off as soon as he could. The Librarian dropped a couple of awesome boosting powers that helped swing melee combats my way. The tactical marines were quite weak, and pretty poor in combat (I had been pre-warned, thank you Nick). The dread was untouchable in combat but didn't do much damage in return. And finally my Reivers – all they managed to do was throw a handful of Shock grenades before being mugged by 30 Ork Boyz (3 is definitely not enough in a unit). They nearly survived the charge too, but fell without getting to inflict any damage.

Lots to read up, especially FAQs and errata. Then it's back to the painting table!