This penultimate post in the Dream Team series is a day later than anticipated - I thought I'd ramp up the drama! Earlier this week I inducted character number 5 into the team, who gets the final spot and why?

All best laid plans can go awry, even if you're running an elite team (have you seen Predator?), so it helps to have someone around who can mitigate any problems should your team have a round of shooting blanks or hitting like a schoolgirl. Basically you need either a tank (someone who can take the hits for the team) or a healer (someone who can recover any lost wounds). The ideal would of course be someone who can do both.

There is a healing spell floating around in the gear deck but you're probably better off giving that to someone with the Spellcaster skill should it appear, in effect making it a free heal. Spellcasting and tanking don't tend to go hand in hand so we may need to look elsewhere for an individual to take one for the team.

Another mitigation skill that I discovered is Lifesaver. This allows the character to be able to pull another survivor in an adjacent zone into his zone, pulling them out of danger. That sounds good, but costs an action when there might be better solutions to a situation. Shove has the opposite effect, pushing zombies out of the character's zone into an adjacent one. Another very useful skill, but needs to be tested first I think. Neither of these will be of much use if the zombies get a bonus turn and your character is lying in a pool of his own snot before he can take an action.

The ultimate tanking skill surely has to be Ironclad:X which makes the character immune to attacks from zombie type X. Only one character has this at the beginning - Gregoire - and his immunity is against Zombie Wolfz, which is pretty good. Is it Dream Team quality though? Is it enough? 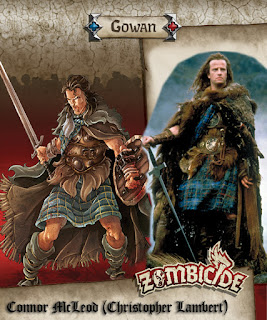 The only other character that I can see with the Ironclad skill is Gowan, who gets to choose between being immune to Fatties, Walkers or Runners once he reaches red level. That is awesome, the only negative being that he has a lot of levelling up to do before he gets there. The thing that gets him into my Zombicide: Black Plague Dream Team is his opening ability, which is Regeneration.

As we discovered in our Black Plague game day at the beginning of the month, taking a couple of wounds on behalf of your teammates and be able to heal them automatically at the end of the turn is a superb ability to have from the start. Throw in some armour and a shield to negate some of those wounds before they land and you have a true tank! Should things get nasty and Gowan levels into the red, he is now immune to your zombie flavour of choice! Stunning!

So by my reckoning that's my Dream Team complete. Just to be sure all the bases are covered I'll do a recap and a look at the team as a group.