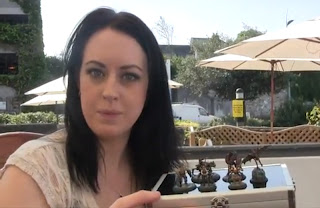 It was one of those ideas that seemed pure genius at the time. As part of the Tale of 3 Painters auction I would take the finished models down to Plymouth and have a game against the famous Joey Berry. Emails were exchanged and arrangements made. It was a long way to go (for us living in the UK) but it would be a good laugh and help raise awareness about the project.

As the time to leave got closer I thought I could tweak the schedule slightly. Michael, one of my fellow painters, couldn't make it down to Plymouth so, given that he lived (relatively) close to me it would be great to pop in and say hello, thank him in person and let him see the models up close. Andy was also finding it difficult to get time away from work and the week before I left I decided to extend the journey further and 'pop' by Swindon also. This took me no further out of my way than a visit to Michael but the combined visits would almost double my journey time. People said I was mad but it seemed a great opportunity to meet my fellow bloggers. 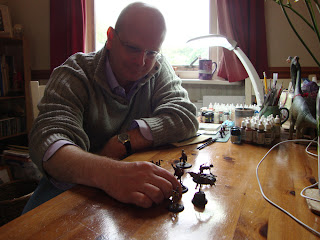 I left at 9am on Sunday and reached Michael within a couple of hours – the road to Westham (#2 on the map below) being clogged up by tractors and Bradley Wiggins wannabes. Michael was full of enthusiasm and a finer gentleman you will not meet. It was great to catch up, exchange our painting stories and thoughts behind the project and auction to come. I got to see his painting table and a whole host of his models. We took a few photos and then it was time for me to be on my way. I felt very buoyed after that and was looking forward to the rest of my journey. 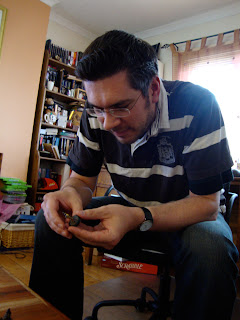 The next hour proved a little tricky. The road up to the motorway was heavy with traffic and, although I pretty much knew the way, the SatNav wanted me to go further West and a battle of wills ensued. Eventually I gave in to shut her up and before I knew it I was passing Gatwick airport and moving a little faster than 30mph. I arrived in Swindon (#3) pretty much as scheduled and Andy was there to greet me – a very affable chap it has to be said, if somewhat camera shy. I have been trading emails for a long time now, exchanging painting thoughts and comments, so it was great to finally meet him. He has the luxury of a painting ROOM in his house, not to mention display cabinets – I'm very jealous indeed. He is a very talented painter and I was lucky enough to see some of his recent Infinity models that he has on the go. But before I could settle it was time to go again – the road to Plymouth awaited.

Three hours later I arrived at the Premier Inn in Lockyers Quay and flaked out for the remainder of the evening. It was at this point that I received a text message from Joey. The guys at the Giant's Lair (the gaming venue where we were due to play) had decided that they couldn't open up at midday after all and the venue wouldn't be available until 6pm. Given Joey's busy schedule and my long journey home this pretty much derailed any thoughts of having our exhibition game. The fact that arrangements had been in place for several weeks it really hacked me off at first, especially after the long journey and cost involved for me to come down to Plymouth. However, one mug of tea later I had chilled out about it. We made some sketchy alternative plans instead. 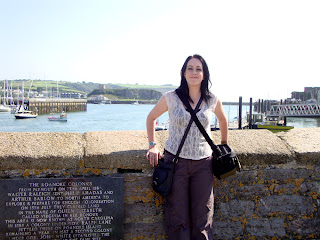 Luckily Monday was sunny and Plymouth is a wonderful place to be in the sun. I caught up with Joey at 11.30 and we sat down in a beer garden to chat about the project and have a little interview. She spent a long time filming the models themselves to add as part of her video. The quality of her video camera means you really get to see them in all their glory. 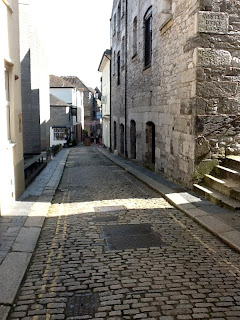 Once that was done she took me on a mini tour of the Barbican area of Plymouth and some very Malifaux-esque streets and cobbled alleyways. We gave Hoffman and the crew a run out so they could stretch their legs and see the sights. 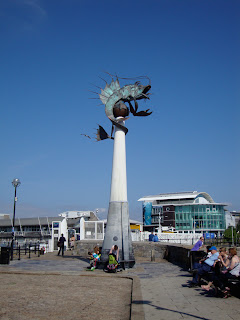 Joey and I grabbed a couple of seats outside a pub – it'd be rude not to in the lovely weather – and had a good old chat about gaming, tournament experiences and models we're painting. I got to pick her brain about how she became the YouTube phenomenon that is The Joey Berry and where she goes from here. She's been swept up in something of a whirlwind since starting with wargaming and, at the risk of sounding over-dramatic, it has changed her life. She is a very genuine individual who is very generous with her time and happy to help out any fellow wargamer if she can – one look at her schedule proves this beyond doubt. She is just as upbeat and friendly in person as she is in her videos and happy to chat all day about gaming.

Of course she's had her fair share of negative comments, critics and haters which could easily have killed confidence and desire to continue in a lesser mortal. However, she is a strong character and treats it all now as water off a duck's back. She's bursting with enthusiasm and ideas yet has her feet firmly on the ground – she's definitely doing it for all the right reasons. After spending an afternoon chatting with her, I have to say, I am now a definite fan of Joey and excited to see some of her upcoming and future endeavours come to fruition. Watch this space! 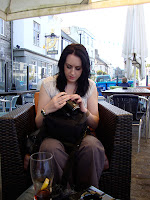 One final check to make sure that the video and sound levels were good then it was time to head back. I took a shorter route home, cutting across country towards London and managed to avoid the rush hour traffic and get home at 8pm.

657 miles in 35 hours –I've met two very talented painters, one YouTube celeb and visited a wonderful part of the country that I haven't seen before. I may not have got my game of Malifaux but it was a very worthwhile trip. Meeting and chatting to these fellow painters and gamers on this trip has given me a boost in energy and passion for our hobby. There are inspiring individuals out there doing wonderful things and their enthusiasm is infectious.

The video interview is now live on Joey's YouTube channel – go and see it here! 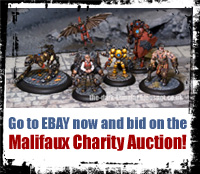