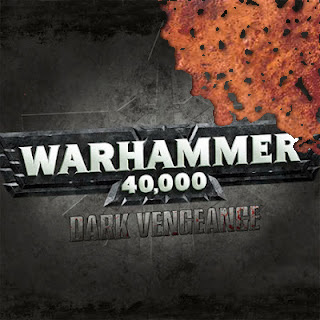 With all the Malifaux painting and the charity auction posts I needed something completely different to look at next.

I have to admit I've been turned off from 40k for what has to be the whole of 5th Edition. I tried to get back into it with my Blood Angel project back in 2010, but the enthusiasm quickly waned. With the release of a new edition or codex there is always renewed interest and this time I get double the trouble – new 6th ed starter box set soon to be followed by a Chaos codex.

I did intend to pick up my Iron Warriors and did a post to that effect last month. However, when I saw the fantastic Chosen models in the Dark Vengeance box they just didn't say Iron Warriors to me. They were too good to pass up so I had to pick a scheme. I have had a fledgling Forgeworld Nurgle army sitting in boxes since just before my Blood Angels appeared on the scene and now seemed an ideal time to give them another look. The Chaos Cultists look like a pack of Nurgle worshippers too so they would fit right in, as would the Hellbrute!

There was one of the Chosen models in particular that cried out to be Nurglized, so I decided to use him as my test piece. 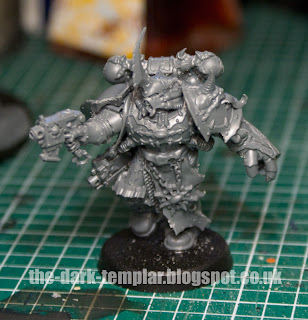 The new plastics are fantastic and I had great fun sticking him together. I decided to go with my tried and trusted "plastic base with penny underneath" treatment to help weigh him down. 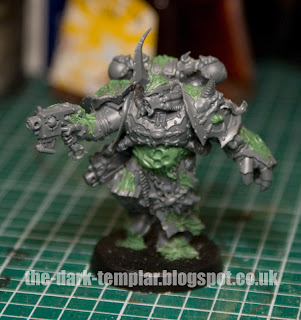 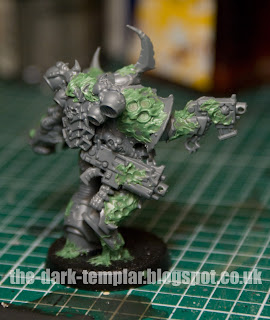 Once done I went at him with the greenstuff and "tweaked" his look to be more in keeping with a servant of the Great Puss Master. I didn't want to obscure the model too much as they are too nice to cover up, so it was more a nod in the Nurgle direction. 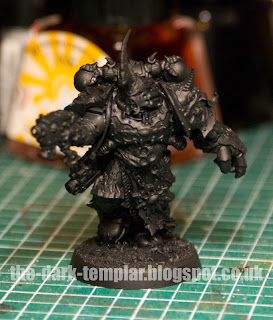 When it came to painting I went in with the traditional black undercoat. 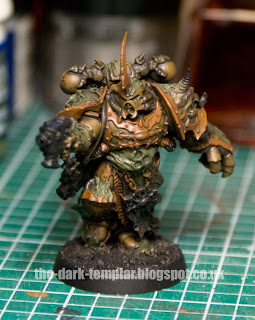 I bought (all that time ago) a tube of Vallejo Model Color 'English Uniform' – an earthy yellow green colour – which seemed ideal and so this will form the basis for my Nurgle armour going forward. Combined with lashing of Devlan Mud and some Knarloc Green gives a superb effect. For the metal I went with a basecoat of Bestial Brown with the metallic paint to be overbrushed later. 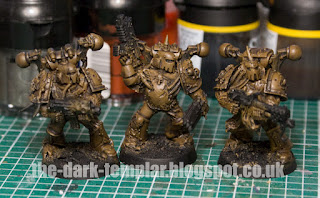 The rest of the Nurgle troops were mid-construction, with most of them stuck onto suitably rotting resin bases. I wanted to go with my weighted penny option for these too so spent some time hacking up the bases to remove the models (which had been stuck down very well!). Bit of a shame but I wanted the heavy bases that I have with my Bezerkers and the resin just wasn't going to work.

I picked out a couple of guys, gave their plastic bits the greenstuff treatment and then set to painting.


Will I manage a complete Nurgle force or will the enthusiasm wane again?
Will I get sucked back into 40k with 6th Edition or will the bright lights of Malifaux and Warmahordes drag me away?

Stay tuned to find out more!