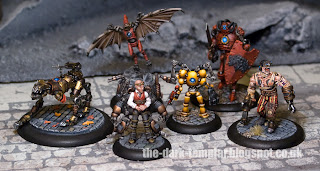 It's auction time at last!

Over the last month you've seen the painting progress of the Hoffman crew than myself and my fellow painters Andy Walker and Michael Awdry posted. I've given updates as supporters have come on board and donated to our final auction and now you get to see what's up for grabs.

First and foremost, if you win the auction, you will get the above C. Hoffman led crew for Malifaux consisting of his starter box plus The Mechanical Attendant and Ryle. That's six models in total, making up a nice 30ss list. The models are set upon resin Cobblestone bases by Fenris Games and are painted to a very high standard. You even get a free penny in the base of The Watcher, used to weigh him down – bonus! 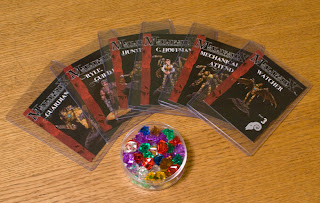 I have also put the crew character cards in Ultra Pro Toploader card protectors and included some plastic gems to use as Soulstones when you play. 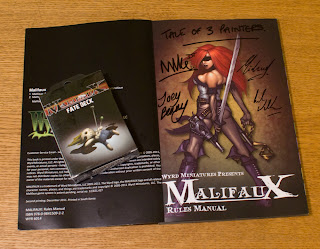 Firestorm Games have donated a red Malifaux Fate Deck and a Malifaux Rules Manual which myself and fellow painters have signed, as has Joey Berry!

You now have everything you need to play Malifaux! 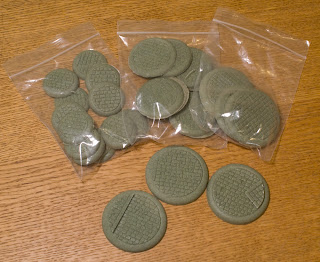 Fenris Games have donated a stack of additional Cobblestone resin bases – 30mm, 40mm and 50mm – for when you want to expand the crew, to ensure they all match up. 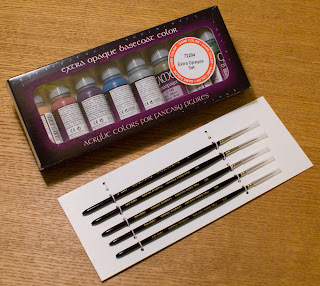 SnM Stuff have donated a set of Vallejo Game Colour Foundation paints and a set of five Kolinsky Sable brushes with sizes ranging from 0 to 5/0. I used both Vallejo paints and Kolinsky brushes painting the Mechanical Attendant and I have to say I love them. I haven't used these foundation paints but I'm tempted to pick some up myself! 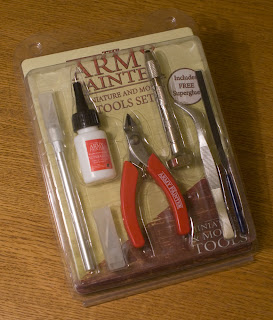 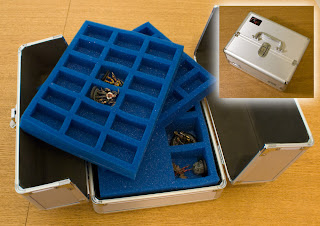 KR Multicase have donated a Half Width Aluminium transport case in which the models currently reside and in which they will make the trip to their new home. The crew toured Plymouth in this case and it was easy to carry and I was at ease about them being well protected. 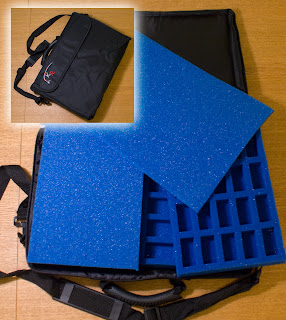 They also donated an Aquilla 4 transport case, which will be ideal for additional models. It contains the same foam trays as the Aluminium case and has a shoulder strap for easy carrying. 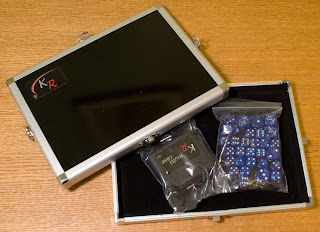 In addition to that, KR Multicase donated an Accessory Case with a tape measure and dice – not that Malifaux uses dice but they'll make good wound markers! The crew cards currently reside in this case and I noticed that the Rules Manual fits in there perfectly too! 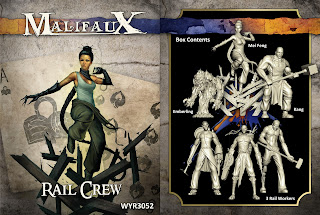 Wyrd Miniatures, who are responsible for Malifaux, have promised us a Rail Crew box set featuring new master Mei Feng. They are also sending The Rail Golem, which is the largest Malifaux model by some way, and the limited edition Miss Terious. These items will be forwarded on to the lucky winner as soon as they arrive, at no extra cost.

Fenris Games have sent us some more bases…

So there it is – quite a haul I think you'll agree. The retail price of this little lot comes in at well over £200 and you get everything you need if you're looking to start playing Malifaux or simply to expand your collection. That doesn't even take into account the superb paint job on the models themselves.

To get things started the auction will have an opening price of just 99p!

To have a chance of getting hold of this lovely loot go over to the Ebay page and place a bid.
Remember it's all for Cancer Research UK, so it's going to a good cause.