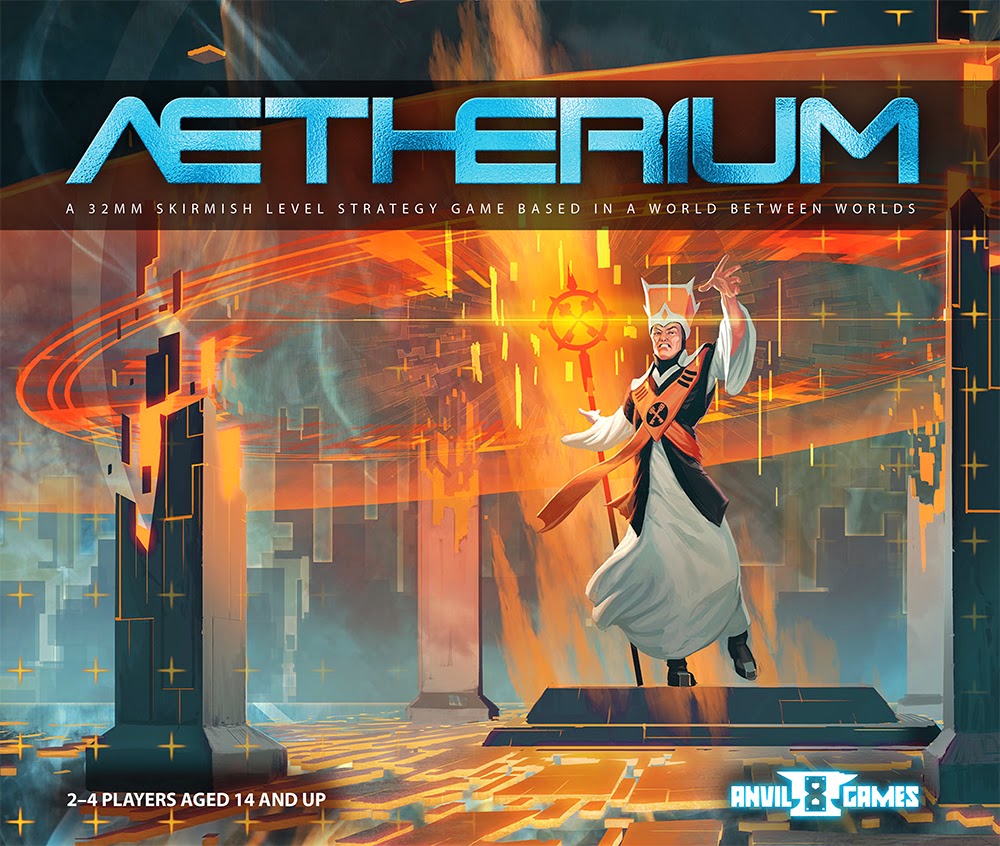 Just over a month ago I talked a little about my role on a project called Aetherium. I went into a little detail about the game, but now it's no longer a secret project – it's been unleashed!

The Aetherium Kickstarter went live on Tuesday and has been doing solid business in its opening couple of days. The guys from Anvil 8 Games will be at Adepticon this weekend to showcase the game in all its glory to the ravening horde of visitors.

I thought I would dedicate a little time today to those of us who won't make it to Adepticon. I'm going to give you a few sneak peeks and offer an overview of some of the mechanics of the game.

To play a game, each player first chooses a faction – Axiom or Nanomei. The Axiom (often identified by their black and orange) are the state, ordered and unflinching; the Nanomei (often sporting dark red) are the freedom fighters and anarchists.

With that decided players need to decide on the make up of their army (or collective). They need to choose an Avatar (hero) to lead, up to two Functions (champions) and up to two units of Subroutines (troops). In the starter box set these are chosen for you, but as your miniature collection grows you will have access to a wide variety of options in all three slots.

By way of an example, fledgling Nanomei fighters will find the following in their starter box: 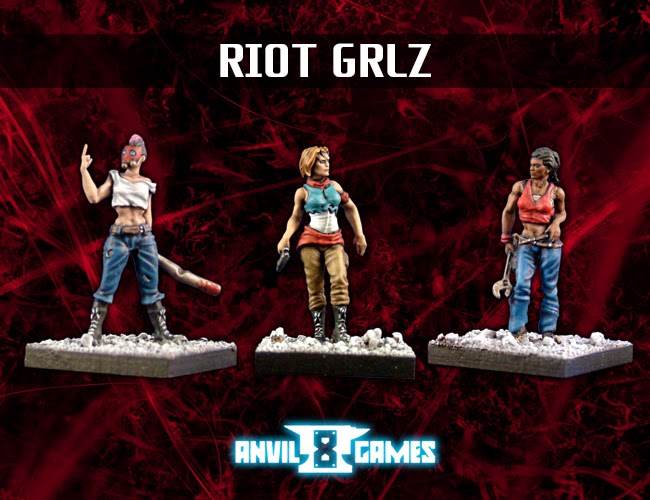 So you've chosen your models, but what do they do?

Each Avatar, Function and Subroutine has a Data Card. Continuing the example of the Riot Grlz above, their Data Card looks like this… 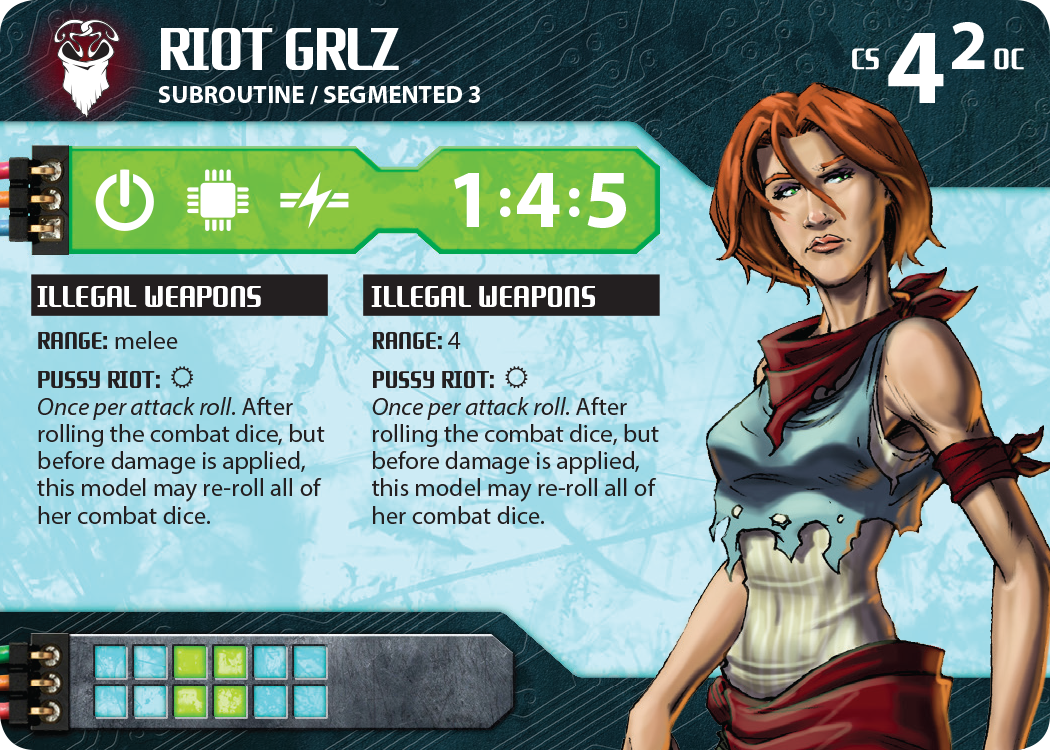 The front of the card shows the faction, name and type of the unit in question. To the top-right you will see a CS (cycle speed) value and an OC (over clock) value. The CS works like action points and shows how often a program can act during its activation, the OC represents how far beyond its normal CS value this unit can go (under certain circumstances).

The middle of the card is devoted to the unit's attack profile. The symbols represent the dice rolls required to make a hit, the numbers represent how much damage you do depending upon how many symbols you match in your roll. Each weapon also has a special ability that is triggered should you roll a disruption symbol (cog).

At the bottom of the card is the unit's Stability Grid – its wound counter. In this case, because there are three Riot Grlz in this particular Subroutine, the grid shows three distinct areas and how many wounds each model has. For individuals such as Avatars and Functions, the grid would be a single colour. 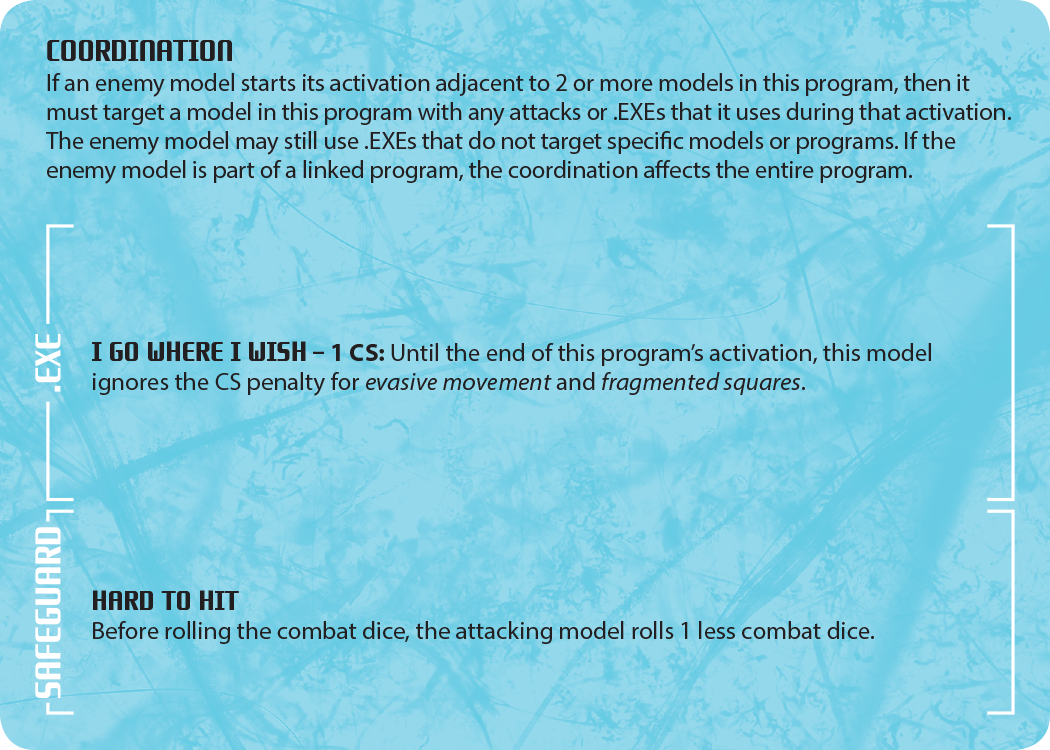 The reverse of the card shows some more abilities that the unit has. All subroutines are made up of multiple models and most of them will have a Coordination skill. This is a special ability that kicks in when the unit works together.

.EXE are special skills. Some are passive whilst others require the unit to spend some of its available CS in order to activate the skill in question. Avatars and some Functions have multiple .EXE abilities available to them.

Finally, we have the Safeguard. This is like a defensive trigger that kicks in when the unit is attacked or targeted. 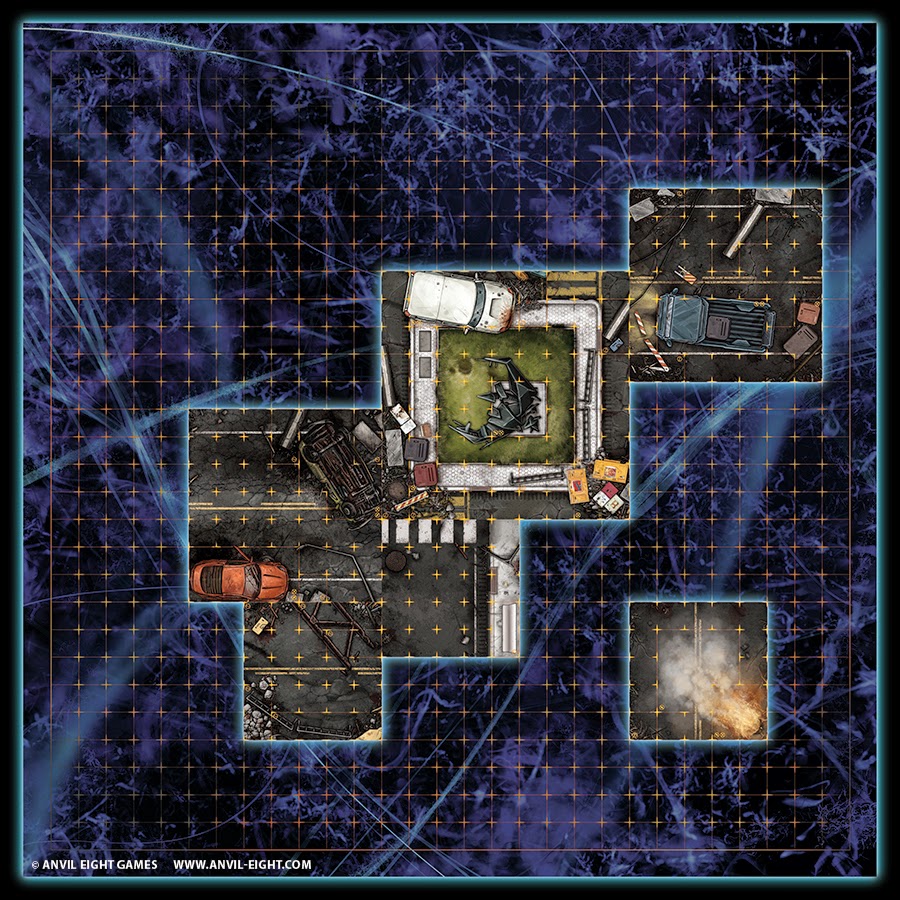 But what about the playing area?

The game is played upon several Schema tiles that in turn sit upon a Common Server grid. The image above shows the Server set up with one large, two medium and three small Schema tiles arranged upon it. Players battle their way across the schema towards whatever objective the current Operation dictates.

Units have the ability to manipulate the playing area by spending accumulated RAM points (the number and type of units you have dictates how much RAM your collective has available) to move or rotate Schema tiles across the Server. The bigger the tile, the more points it will cost to move.

But why would you?

Below we have a prime example. The unit of Praetorians (far right) can't get to TOV (left) because not only is there a car blocking the way, but also because there is a gap of Quantum Noise between the two Schemas – they're not touching. So they decide to spend some RAM to manipulate the playing area to their advantage. 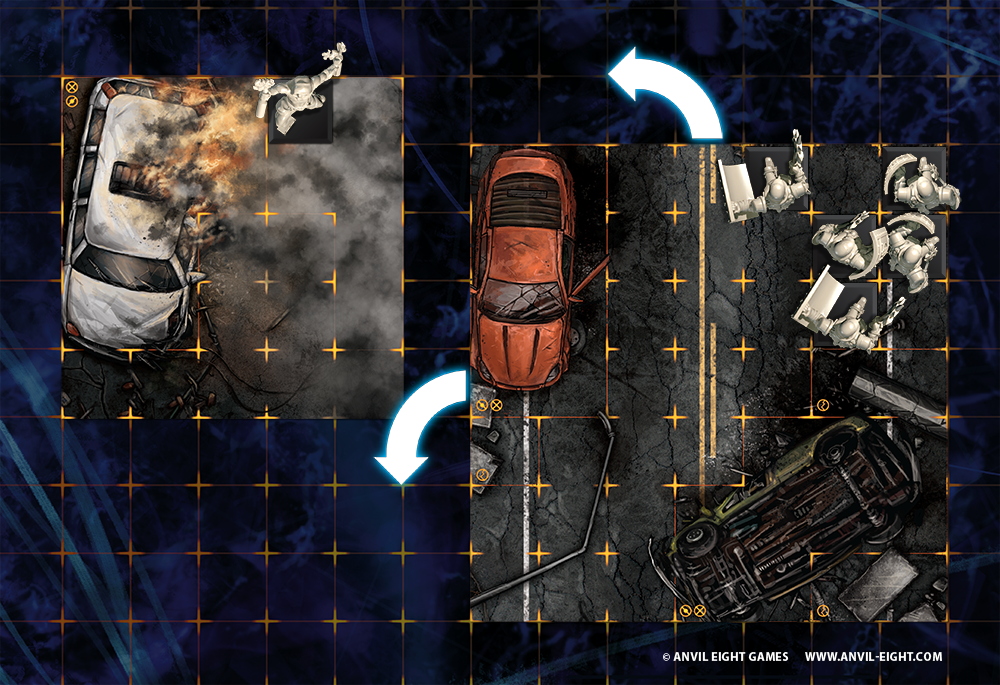 First of all they spend a big chunk of RAM to rotate the Schema on which they are standing. 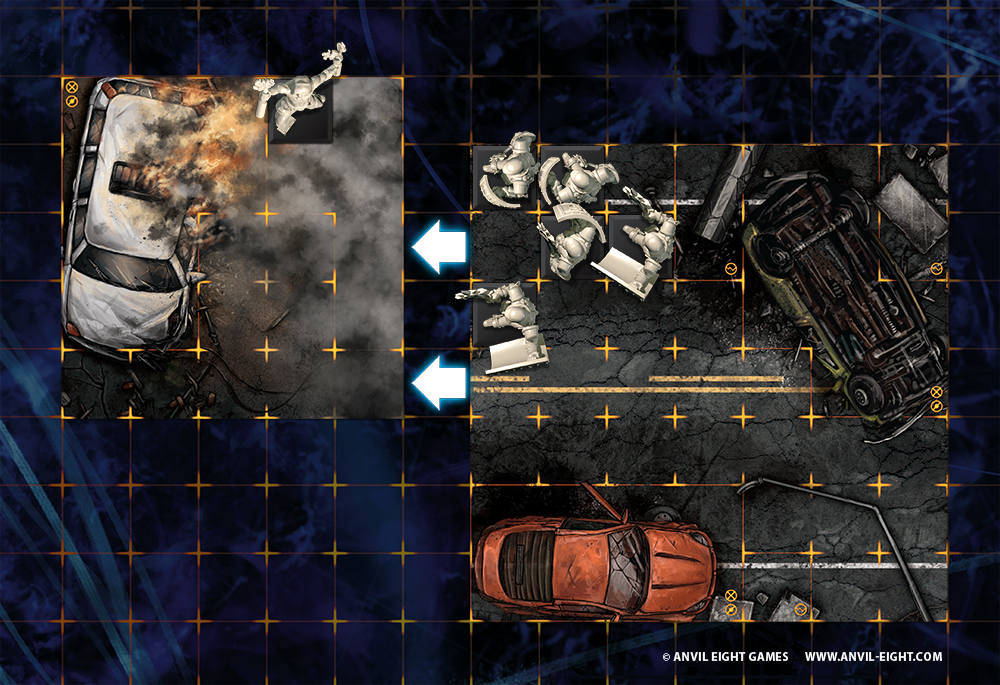 Then they spend some additional RAM to move the same Schema a single square to the left so that the two schemas are now touching. 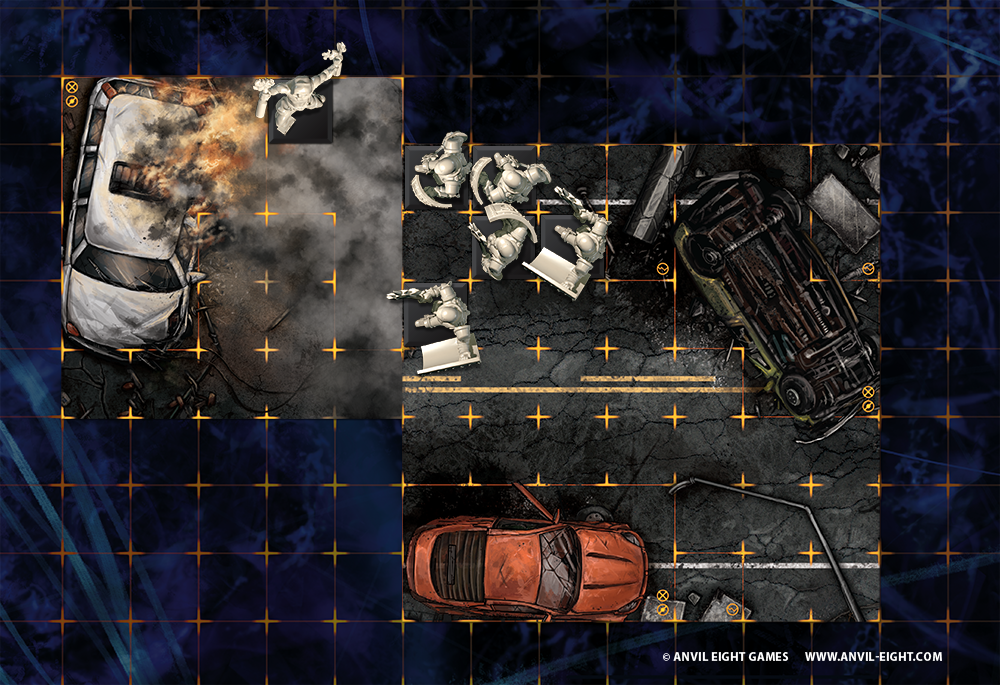 As you can see, the Praetorians are now in a perfect position to activate and attack TOV.

Of course, this ability can be used as much to hinder your opponent as aid your own units and means that the playing area is in a constant state of flux. As a consequence, so must your tactics.

And that's all you're getting from me for now. If you want to know more go to the Anvil Eight Games website and remember to visit the guys at Adepticon from 3rd April (tomorrow!!) and get your FREE MINIATURE.

Don't forget to have a look at the Aetherium Kickstarter. Lots more information there, videos, an overview of the background story, lots of photos of miniatures, oh my!!


Please note that all the imagery you see here is the sole property of Anvil Eight Games.