40k: Back To Iron Warrior Basics 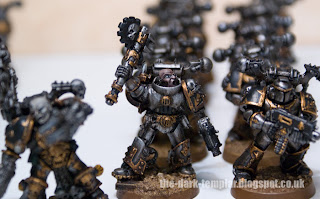 So the big launch of 6th Edition was this weekend and I purposefully stayed away from any town with a GW store in it. I made the decision last week that I wasn't going to buy the large rulebook, for a number of reasons. First of all, that's a lot of money for something that is going to have limited use. I have no interest in the modelling pages or indeed the fluff – there's not a lot they can tell me that I don't already know and I didn't fancy paying for it all again. If the background story has moved on then great, but my interest in 40k does not extend that far, so I'm going to pass on the expensive weighty tome.

I will however take a very close look at the starter box set when it finally arrives. We all love the cut down A5 rulebook, and it's far more suited to my needs. Then there's a host of plastic models that will find some use (or a new home via Ebay) so, unless they go silly with the price, that is where I will spend my money.

With that in mind, I have until September (assuming box will land then as per rumours) to sort out my Iron Warriors. As I mentioned in a previous post about them, my IW collection is a rag-tag accumulation of tournament veteran models and the odd Apocalyse support unit – it's not a balanced or practical army.

I'm going back to basics, re-painting my models where needed, to create a fully functioning and gorgeous-looking Chaos Space Marine army. 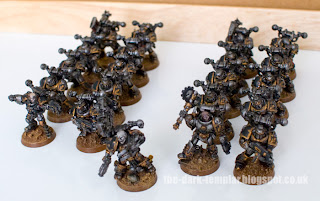 To start with I prepared an HQ and two full Troop choices, as per the Force Organisation Chart. I have to admit I pretty much used all the Bolter grunts I have, adding Missile Launchers, Plasma Guns and Champions. All that is left in my troop case is a handful of Lancannons and a couple more Plasmas.

You can see from the close-up photos that the paint jobs across the board don't stand up to close inspection – it was a basecoat and heavy ink job at the time and they're all looking a bit tired and war weary.

First job on the list is to add pennies to the bases to give them all weight – how can they be true Iron Warriors if they fall over in a stiff breeze!?!

Then I will go back and re-paint the armour and details with the additional painting experience gained since these models graced the painting tray. Once they are complete I will look at either adding transports for these units, or move on to Elite or Heavy Support additions. 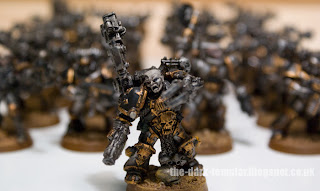 It will be as if I'm starting a brand new 40k army, except with a boxful of models already in my back pocket. I will proceed in a balanced manner to try and make the army as competitive and characterful as possible, without resorting to tournament extremes.

Hopefully, as Bull puts his Orky house in order and the two armies cross paths we should see things develop. And once the new Chaos codex is released – rumoured August – the real work can begin.
Posted by The Dark Templar