So with a (contested) draw and two very heavy losses so far with Kirai there is a lot to think about. As you can imagine I have done a lot of researching and reading about the crew, what seems to work for people and what doesn't. Looking at my own experiences so far my conclusions are as follows.

Kirai herself is a great master on paper. Yes she is vulnerable when attacked in melee, but with a few Seishin to pass wounds onto or sacrifice, together with her swirling ability and Pitiful she can survive longer than expected – though I have managed to get her killed once already. Even with her extra (+1) Intinctual she has far too many cool abilities than I can use in a single turn. I was drawn to her (over the other Resurrectionist masters) for a reason. However, going from a pure Guild beginning, Kirai is like a brand new pair of shoes – it takes time to break them in and make them truly comfortable – but I am determined to get her to work for me.

The Lost Love is another great model, and at 2ss an absolute bargain. It's big trick of saving Kirai's life when she dies is amazing, however, I think this has held me back from using the model to it's full potential – using Magical Extension to cast things such as Chill of Death and summoning additional spirits. I can't think of a reason to not take this model, except to make the game more challenging. 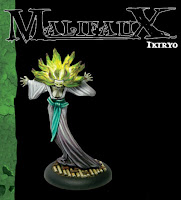 Ikiryo – nothing much can be said about this spirit. It may take a second crow to summon it, which can be a pain, but it's a free model and has great utility. I haven't witnessed its awesome melee ability that I read about – it tends to inflict a couple of wounds then gets battered in the return – but it is one of the bigger hitters available to Kirai so it's not as if I'm NOT going to summon it at some point.

Datsu-Ba has some great utility skills and a fair few wounds, but I have found her next to useless in melee. Being able to give a spirit a free move, together with her healing and ability to summon Gaki have all been useful if not amazing. For a 7ss model I'm struggling to include her after her performances to date. I obviously don't quite understand her, but I don't want her to become another Francisco Ortega who even at 5ss never seems to be good enough for the first team. 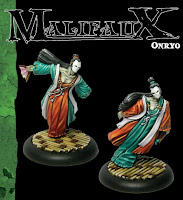 Onryo are the grunts and they do as well as can be expected. I haven't managed to get off a Blind to Spirits or Denial of Sanzu – or even Haunt for that matter – which would lift their usefulness no end. I'm unlikely to include them in a starting lineup as they can be summoned (and regularly are) and I really need them to inflict a bit more pain, but I'm not ready to dismiss them yet.

Shikome is the one model that has almost lived up to expectations. I know for a fact that Fugs fears this model which is why he has been quite prejudiced in taking it down recently. I didn't use it very well in my last game – forgetting about her spell tricks – but if you can summon her into combat she can have fun with her new target. I have contemplated getting a second Shikome but am reluctant until I can get the rest of the crew working.

I've had a few brief glimpses of the Gaki in action. They haven't inflicted a lot of damage (a running theme with the crew so far) but they have scared the Terror Tots on a few occasions and as a 'free' model they are great simply as extra significant bodies on the table. For this reason I have no real expectations with them, so time will tell how useful they turn out to be.

The Hanged is a model with a lot of potential to me. Unfortunately he got blown off the table on his debut so couldn't contribute much. In the second game he attempted to cast Beyond the Grave several times against both Lilith and Taelor. Without any negative flip mechanic already in place he was never likely to actually get the spell off, but it did cause Fug to cheat and use soulstones to ensure such a devastating spell was prevented. Combined with his Terrifying, this model has become a threat yet to deliver on his potential, but the threat is there – it's only a matter of time and circumstance before he delivers.

Insidious Madness is a model that has not been fielded yet. He is pure utility and could either be a roaring success or a puddle of dead snot on the battlefield and a waste of 4ss. The combination of the negative WP flip aura and Terrifying could become very useful. Combined with the rest of the crew – The Hanged especially – there is the potential for a lot of hurt. He is currently a favourite for the next outing, to test some of the theory.

Other models that I have considered include:

Jack Daw, who combines some of the threat of The Hanged and Insidious Madness but who will also have a steep learning curve. He's expensive and has a few too many random abilities that could blow up in my face, making him unreliable (which is the point of the character, let's be honest).

Convict Gunslinger is an all-round solid model. Fugs knows his abilities having fielded him regularly for months so will fear him. I can turn him into a spirit for extra depth and survivability and he gives me some ranged options. He's not very in keeping with Kirai's spirit theme but may be a useful addition, for a while at least, giving me some breathing space to sort out the rest of the crew.


So, where to go from here?

I've decided to take a week off from gaming next week. One game a week is actually too few when you're trying to learn a new crew – you build up the excitement and theory all week then if you make a mistake or two and it blows up in your face you have to wait a whole other week until you can try again. Despite this, breaking the losing cycle can be as easily achieved by taking a rest as anything. I hope to get some models painted in this time so that I can take some more photos without being totally embarrassed and it will give time for the pre-game giddiness to subside and hopefully be replaced by a confident calmness and clear thinking.
Posted by The Dark Templar