With Guild Ball taking the pole position in the hobby this new year I've spent some time putting together the rest of my Butchers team. 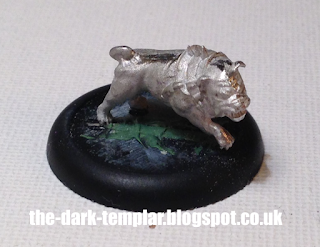 The Butchers loveable mascot is a three piece model. Alas two of the pieces are tiny legs, which proved a bit of a challenge to not stick to my fingers. I'm hoping this will be a quick win on the painting side as Princess should be a straightforward colour scheme and there's not a lot to her.

On field she should boost Boiler and Brisket as well as add a bit more bite to the team. I'm not sure what to make of mascots yet, they seems almost comedic. We will see! 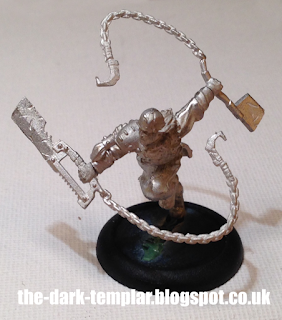 I love the overall pose of this model, if not the character himself. Another three piece model – the body and two hands holding weapons. I just needed a little reference to get the right hands in the right places but a very easy model to build. I did pin both hands to make sure nothing got lost. I have no idea how I'm going to transport this model without bending the chains and subsequently damaging the paint job.

This guy is all about dodging and damage, with an extended melee range. Other players have mentioned his scoring ability too, but regardless, he seems a solid all rounder. 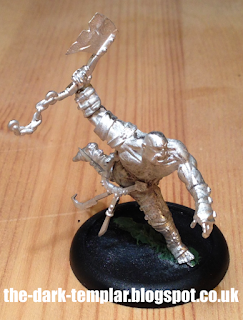 The big man, huge model. This is the one that everybody wants to see (or not if he's charging straight at you). A four piece model – body, two forearms/hands and his belt. That belt is quite fragile at the blade ends and it's not a terribly good fit at the body end. However, there is plenty of glue securing it in place so it should stay safe – worried about those blades bending though.

This guy will be a monster on the pitch no doubt, though his maximum allowance of 1 influence will please Bull. I'm going to have to be clever in how I use him if I'm to get the most of out him. 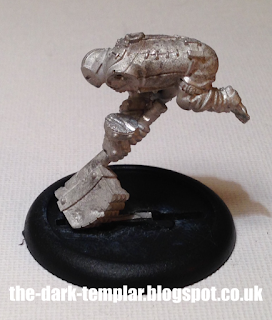 I have raved about this Season 2 model for a while – love it – but building it has been a challenge. It's a two pice model (plus some accessories) and therein lies the problem. The hammer and both arms come as a single piece and will not fit into the sockets on the body. I tried for hours, tried brute force, tried pliers… no joy. I've no doubt the resin version could be bent into place but the metal was having none of it.

I have ended up (as you can see above) resorting to hacking off one arm with a hacksaw at the wrist, pinning the first arm in place, with the plan of pinning the second at a later date. It will need some greenstuff repairing but should look the business when done. Note to Steamforged Games: make this a three piece model in future please!

As my goalkeeper, Tenderiser will no doubt hang further back to ensure no opposition players can score. He gets lots of bonuses in this regard and a wicked hammer blow pulse that knocks everyone down. I will have to drop someone else from the team if I include him so difficult choices to be made.