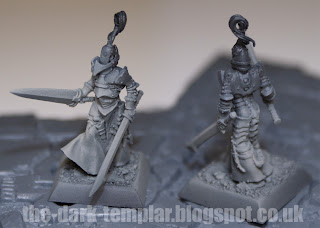 At the end of the last step I had finished airbrushing and the model looked as above. It was time to put down the airbrush and get stuck in with a traditional brush and very thin paint.

To finish off the 'skirt' I had my four key colours – Black, Cryx Bane Base, Cryx Bane Highlight and White. Starting with the Base colour I went in with my brush and added layers of very thin paint over the airbrushed work, using lots of water on a clean brush to feather the edges. I pegged back some of the highlights, leaving just the extreme areas. Once happy I added Black to the mix and did the same in the shadow areas, constantly applying water to smooth edges and try to maintain graduations across the model. 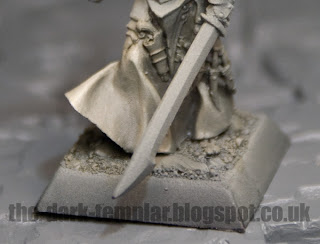 Then I went in again with the Highlight colour, bringing up the edges. White was added to the mix for the extreme edges. This resulted, as you can see, in a much higher contrast between the shadows and highlights and allowed me to start to pick out some details in the cloth.

It was at this point that I took the opportunity for an experiment. I had seen lots of videos in Youtube about how to paint power weapons with an airbrush and thought I would give it a go. As much as this character doesn't have a power weapon, one particular sword is meant to be quite fancy so that would do nicely. 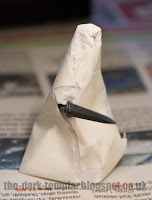 I wrapped the model in kitchen towel to make sure than none of the inevitable overspray got near the parts that were finished, or clogged up the detail anymore. With Sin Assyris all tucked up snug, with just the sword showing, I stuck strips of masking tape along opposite sides of the sword – top edge on one side and bottom edge on the other. I then sprayed graduations from Black, through Grey, to White. Once dry I removed the tape and added fresh strips to the parts I'd just painted. I then sprayed graduations of White, through Grey, to Black on these exposed edges. 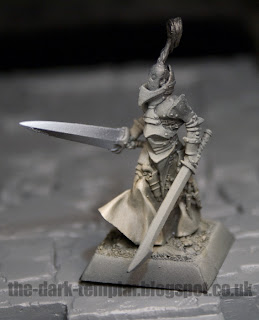 That should have worked a treat, but in my haste (I had limited time) I had made a couple of key errors. First of all I had slightly missed the line down the middle of the sword when placing my tape, which resulted in one graduation going over onto the 'wrong' side slightly (pic below). The other mistake, as you can see in the photos, was that I didn't let my first graduations dry long enough before putting tape on them. Despite removing as much of the tack from the tape as I could with my hand, it pulled off some of my lovely smooth paint. 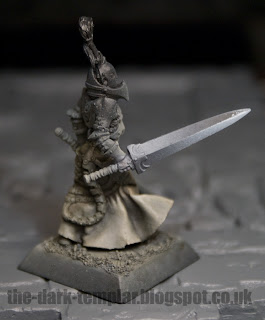 However, in terms of the process it worked quite well. You can see what I was trying to achieve and it kind of worked. I will not try and go over it with more spray, but I will go back in with my brushes and use the spray as a base for my brush painting, as I did for the skirt. I've learned some lessons here (always learning) so the next sword I attempt should look pretty fantastic.