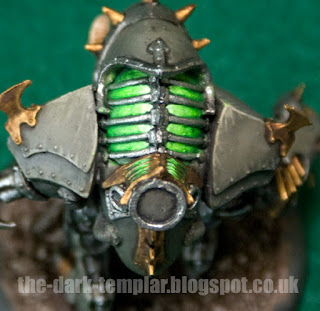 One of the key features of the Cryx army is the power source of their machinery… souls. And it seems that souls give off an eye-watering green glow when used as fuel, which is as intriguing as it is disturbing. 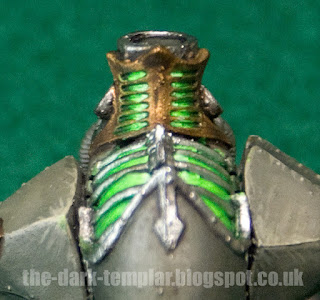 Nevertheless, I had to learn how to paint a green glowing power source on my Cryx Helljacks – not to mention warcasters – if they were going to look the part. You've already seen my green glow attempts with Asphyxious and now it was time to paint the big dog – the Slayer. 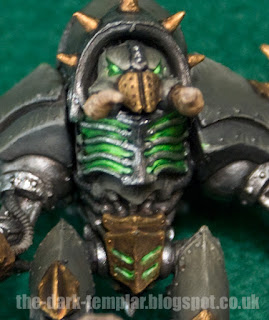 More so than almost any other Cryx 'jack, the Slayer has a lot of glowing elements. Having already painted the surrounding areas to an almost finished state I set to work, mixing some Black in with my Vallejo day-glow green paint. 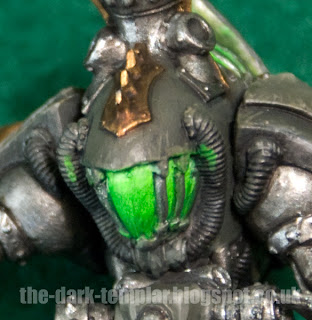 The problem is that the green paint is very transparent, so it took a lot of coats to get a solid foundation. I then added pure green layers before starting to add some white to the mix. By the time I'd reached an almost white layer I realised that it was all a little too light. I then added some thin green layers to build up the colour in the shadows before adding some GW Thraka Green wash in the dark corners. 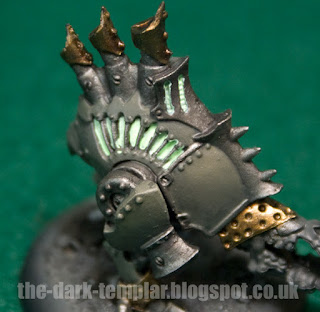 It turned out to be quite a messy process, as you can see, with areas of my 'finished' model covered in bright green paint. So, with this in mind, I have done some forward thinking with the next 'jack. I used some of the leftover highlight paint to get a couple of quick undercoat layers in on this Bonejack. This gives me a decent base to work up the glow from, before I've spent too much time on the surrounding areas. Hopefully this should give me a better result.