Thinking About The (Gaming) Environment…


No game again this week, due to having some guests staying at the house, so I was thinking about what to post in lieu of a battle report (I've noticed a blogging schedule of Mon/ Weds/ Fri developing).

Back when I started my interest in Malifaux, almost a year ago, I wanted to create the perfect gaming board on which to play. I had been totally blown away by the Victorian London-esque environment that was the abandoned city of Malifaux. The accompanying artwork only managed to ramp up my enthusiasm for creating something spectacular. 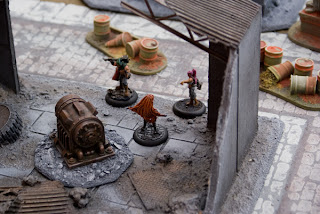 I created my gaming board as a cobbled crossroads, lifting the idea from Gangs of New York and the Five Points at Paradise Square. I had plenty of ruined 40k buildings (that would stand in on a short term basis) to flesh out the area and develop the height. I harked back to games of Necromunda and the multi-level gaming arena games would be played on, the result being a very ambitious office block project that stalled mid-build. 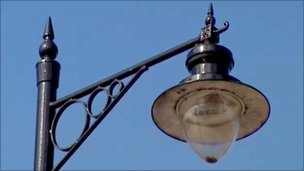 The most notable side effect of my intense Malifaux interest was an increasing obsession with lamp posts, the more classical and ornate the better. I photograph lots of lamp posts and street lighting wherever I went. Even Bull got in on the act, emailing me photos from all over the place whilst on his travels for work. I designed several options for steampunk versions of Victorian lamp posts on the computer with the intention of building a master and casting up the components in resin to fill my city streets.

My first Malifaux crew was based on cobblestone bases by Fenris Games (I couldn't delay building and painting my fledgling Lady Justice crew while I made my own bases) and things got very exciting.


So what happened? Why did this fantastic vision evaporate?
Two things happened.

First of all, having been a freelance graphic designer up to this point, I got a full time job. This meant I couldn't just taken random afternoons off to build terrain, paint and blog. My hobby time was suddenly restricted to evenings and weekends… and I wasn't very enthusiastic about doing stuff in the evening after a stressful day.

Secondly, I actually started to play the game. I learned how to play my crew, learned about its shortfalls and wanted to expand the range of models I owned. These new (gunslinger) models would look out of place in the city and on cobblestone bases, so I created my own bases and the Malcontent project was born. This took upon a life of its own during the latter part of 2011 and the beginning of this year, to the detriment of all other things hobby related – hence me calling a timeout. I went back to the painting and playing, now having my buddy Fugs as a weekly opponent. I had my new Kirai crew and an escalating pile of unpainted miniatures as my powergaming mojo reared its head again, causing a purchasing frenzy as I tried to gain the upper hand with new models.

And that's how things stand at the moment. We've missed two consecutive weeks of gaming which has allowed me to do some more painting as well as take a step back and assess how things are.

Where to go from here?
I thought about buying a brand new crew, having played Kirai for three months now. As much as this is always appealing for a gamer, the prospect of collecting a ton of fresh metal didn't make sense given the backlog already in residence.

I have decided to let things travel full circle and over the next few weeks will be going back to The Guild faction to finish off the models I have, learn to play the FOUR Guild crews I own more effectively and draw a line of some kind under my first year of exposure to Malifaux. I don't have to buy any new models as I own everything in The Guild faction (aside from a handful of book 3 models).

However, this won't mean an end to the purchasing (sorry wife) as Flames of War has caught my attention and I quite like the idea of having a starter army of Germans again (I had a reasonable collection of Germans back in 2005 and sold the lot) just in case the opportunity arises to have a game – I blame the Angry Lurker after his recent battlereports from that era.

In addition to this I want to pick up rulebooks for some newer games such as Hell Dorado, Freebooters' Fate and Secrets of the Third Reich to name just a few. I like to read alternative skirmish rules and have a small collection of books already.

As for the terrain, I'd like to develop my Victorian cityscape but at a more manageable and sensible rate – bitesize chunks as the revision manuals always say. My plan is to have a stunning environment to play Malifaux in as I love the character of the game. Salute 2012 is on the horizon and I want to go there with a sensible shopping list to aid in this venture. We will see…
Posted by The Dark Templar