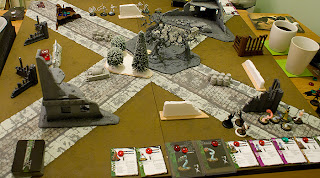 Tuesday game night was cut short again due to me being on family chauffeur duties to and from the train station.

Having initially indicated the need to borrow Guild models again, Fugs turned up with his salvaged miniature case containing (still unpainted!) Lilith. He hastily stuck a one-armed Lelu onto his base and we were ready to go (he wasn't buying my idea that Lelu only having one arm meant he lost Melee Expert ability).

The Neverborn lineup consisted of Lilith, Cherub, Taelor (yay!), Lelu & Lilitu and a Terror Tot. Fugs flipped Treasure Hunt (which incidentally has not come up before in 12 months of gaming) and chose Bodyguard and Assassinate as Schemes.

I took my usual team of Kirai, Lost Love, Datsue-Ba, 3x Seishin, 2x Insidious Madness, Desperate Merc and Canine Remains. I managed to flip Contain Power and took Hold Out and Stake a Claim to complement.

Turn 1 was pretty routine. I managed to get quite a good control hand with 4 cards over 10. However, my team weren't singing from the same hymn sheet as me and I managed to use my entire hand getting them to do my bidding. The Canine was unable to wound the Merc (!) and in return was killed, creating a Seishin and Gaki as required. The Terror Tot had sprinted to the Treasure counter and was sitting quietly in base contact with it. I summoned Ikiryo on top of the Treasure but was unable to outright kill the Tot. The Gaki moved up to support Ikiryo. I summoned Shikome who shot down the board to attack Lilith, the Neverborn master spent 2 or 3 Soulstones to prevent the incoming attacks/damage. 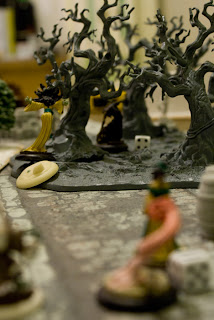 Turn 2 saw Ikiryo kill off the Tot, pick up the Treasure and move slowly towards my line. Taelor turned around and charged Shikome to relieve Lilith, unable to quite kill her. Lilith finished off the bird before moving up to support the twins. The twins jumped into the woods, Lelu charging the Gaki, inflicting a couple of wounds and stacking enough poison counters to pickle the battered spirit. Lilitu made a melee strike against Ikiryo from full 4" range. I swirled the Gaki out of danger, replacing it with Datsue, who proceeded to inflict only weak damage on Lelu. The Gaki was then sacrificed to give Kirai a boost, before she brought on an Onryo.

Turn 3 saw Fugs Transpose Lilitu with Taelor. Lelu battered Datsue-Ba, inflicting 5 wounds and 4 poison (meaning the poison would kill her as soon as she activated next). Lilitu moved up and hit Datsue for another couple of wounds. Afraid that I would swirl and sacrifice again, Taelor hit Datsue, killing her (and giving me a new Seishin). She attacked the Onryo with her remaining Strikes, inflicting 4 wounds.

In the meantime I had moved up an Insidious Madness and cast its negative WP aura and summoned a Shikome into base contact with Taelor and the Cherub. Ikiryo pulled my lone Seishin towards the combat before turning and striking Taelor (now on negative flips to defend with WP) inflicting a handful of wounds. The Seishin Empowered the Onryo before being pulled back to Kirai's side. The boosted Onryo also struck Taelor inflicting more wounds. Taelor's Hard To Wound ability meant that most of my damage flips were negative which was a pain, as was her Hard To Kill. Enter Shikome who took Taelor's head off with her first Strike, before turning and killing the Cherub then getting a Strike in against nearby Lilith, who again had to use a Soulstone to protect herself.

At this point, the end of Turn 3, we had to call it due to time running out. Technically Fugs had 2VP for Bodyguard and I had 2VP for Hold Out but it was very early in the game – Turn 4 would have been make or break for both sides. 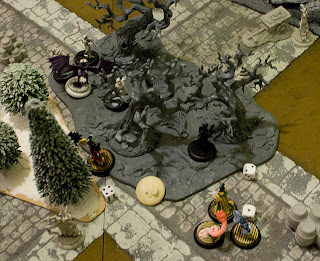 I learned a lot about the twins. I learned if you want to kill them you have to do it outright as they can heal even 4 or 5 wounds at the end of every turn – that can be very demoralising. Having taken down Taelor with a combined attack I'm confident I can take down one of the twins at least with a couple of Shikome and Ikiryo. I do love the Insidious Madness. They don't always contribute fully but they are fast on their feet (if they have any) and the negative WP aura makes life a lot easier against these big Neverborn hitters.
Posted by The Dark Templar