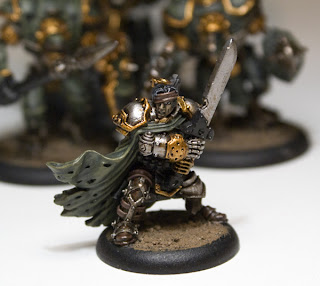 Whilst going through the attic looking for my missing Dreadnought, I (re)discovered a carry case full of non-GW figures, and thought I'd photograph them and put them online.

When I lived in Tunbridge Wells I used to game every Tuesday (until we discovered WoW, then you didn't have to leave your room to game!), and now and again we'd deviate from the ongoing 40k battles. I got into Warmachine after being introduced to it by my gaming mates back home in Wigan, so brought this to the table as an alternative. As usual I couldn't go with one of the standard armies, so went with Mercenaries, and my warcaster Magnus the Traitor (above). 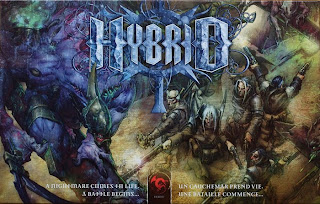 The other game I really loved was Hybrid. The models were just exquisite, and that is how I was introduced to Rackham and their stunningly painted figures (the first time I was exposed to the NMM technique). I felt like I had been asleep for the last 20 years and woke up over the rainbow. 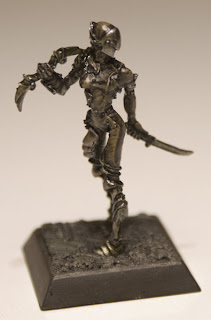 I went on to collect a whole host of Rackham minitaures for the Scorpions, including a limited edition Sethin figure (which I still haven't finished painting!), and this assassin pictured above. Alas now none of these figures appear to be available anymore, and rackham now seem to produce quite plain looking stuff.

Given the background of the game, and the Scorpions in particular, I went for a very dirty, oily look to the painting. The bases were decorated with a distressed piece of platicard and a very small amount of sand, to represent the dirty, decaying basements and corridors in which the experiments and missions took place.

One day I will go back and paint the hybrid models themselves, of which I have 3 variations – stunning sculpts and altogether scary opponents.

Oh and by the way, I found my three missing Dreadnoughts. I took the one and needed and hope to get a bit of Blood Red paint on him before my game next week, so at least it looks like he knows which side he's on!
Posted by The Dark Templar