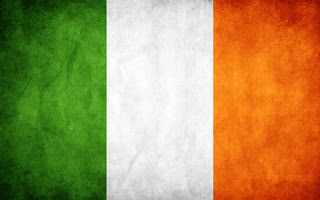 Arrived back home this afternoon after a lovely windswept, rain-sodden, sun-tinged week in the Emerald Isle. It's one of those places you always feel you should go and visit, being so close and all, especially if you have family from there (like most of the US if the visitors were anything to go by – met more yanks than Irish).

I'll be showing some photos that I took in a later post, when I get back to the gaming board, as I've brought lots of inspiration back with me. However, as a stop-gap I thought I would highlight a couple of things I learned or observed while I was there. Just my opinion – feel free to disagree ;)

First of all, living in Kent, it's only an hour away on a plane to Dublin. That is insane – we were in the queue at Hertz to collect the car for longer than our flight (which says as much about Hertz as it does the travel times… but don't get me started on those cowboys).

It's not cheap. For some reason I thought it would be one of the cheaper holidays we've taken in recent years but without going overboard (aside from a massage treatment after a day of walking) we manage to spend a disturbing amount of money without realising it. Time to tighten the belt. I'm sure if you know people over there who can navigate you to the more cost effective places to eat, drink and visit, you could come away with more cash left in your pocket.

Driving there is virtually the same as driving in the UK, but with much less traffic. The motorways were only two lanes for the most part but the traffic (once away from Dublin) was like an early hours Sunday morning drive. The main roads have a large 'hard shoulder' that doubles up as a lane for slow traffic which is genius and meant no long hold ups behind lorries or tractors. The only thing that stumped me a little was everything from speed to distances was in kilometres.

The weather. Yes it rained, just like everyone said it would. However, it was also very sunny. Because of the high winds where we were the weather was very changeable… I'm talking minutes between a heavy downpour and cloudless blue sky then back to rain. Incredible thing to watch. It meant you had to be prepared, but as we were it was not a problem. One taxi driver described it as four seasons in four hours and he wasn't far wrong.

The people. Maybe it's because we're in an economic downturn and people have a lot more to think about these days, but the image of the ever-friendly, chatty Irish man/woman beaming… no. It was no different to being in the UK. People were just as miserable, with a few exceptions. Given a lot of people we spoke to were in the service/tourism industry I found this surprising. As I said, there were a few exceptions… and the exceptions were exceptional to be sure. That's not to say that they're not passionate – we had a day of demonstrations in Dublin yesterday that spilled into lots of pushing and shoving with the Garda (police)… and that was the pensioners complaining about cuts. I overheard one guy say to a Garda that people are just very angry at the moment in the city.

The countryside. I know they call it the Emerald Isle but I was blown away by how beautiful the place is. Looking through the photos we took, it seems like I've ramped up the saturation on the greens, but the trees, grass and mountains were such vivid colours it took my breath away. The landscape is reminiscent of the Lake District, in the North of England, but a Wizard of Oz version of it. We spent a couple of days in the National Park near Killarney and it was beautiful. This time last year we were at Mariposa Grove in Yosemite National Park and I couldn't get over what a spiritual place it was – this place gave me a very similar feeling… one that puts you in your place and makes you appreciate these lovely environments.

So, that (in a nutshell) was Ireland for me. Aside from Dublin we only really did the south. It was not quite what I expected but it was a very beautiful place and I'm so glad we went. I would like to go back at some point a do Northern Ireland as well as the more northern and western parts of Eire.

Normal service on the blog should resume next week!